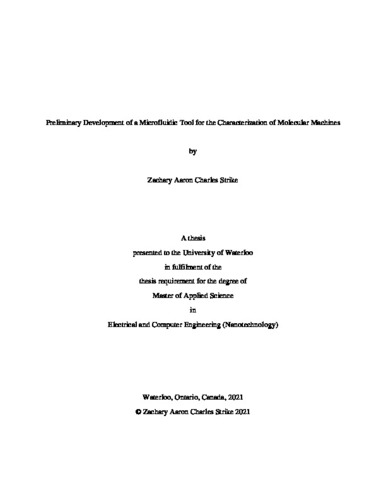 Transmembrane proteins cross the membranes of biological cells and perform integral cell functions that often must be described using quantum mechanics. Developing a better understanding of these quantum mechanical behaviours of transmembrane proteins (i.e., their quantum biology) can enable the development of novel materials and devices, such as more efficient solar cells or chemical sensors. Studies of these behaviours are typically performed in environments that are not biologically representative, like outside of cell membranes and at cryogenic temperatures, leading to possible mischaracterizations. The objective of this thesis was to develop a microfluidic device to facilitate the study of transmembrane proteins and their quantum biology in a biologically representative environment. Laser-cut polymer microfluidic droplet generators were designed and tested to generate water-in-oil droplets and create artificial cell membranes using droplet interface bilayers (lipid bilayers formed by two contacting droplets, “DIBs”). Droplet trapping structures were incorporated into the droplet generators, which held two droplets stationary and in contact, forming a DIB. The devices reliably generated droplets with less than 5% volume variance suitable for forming DIBs that were stable for up to 24 minutes. However, inconsistent DIB lifetimes and unwanted droplet splitting were significant issues. While this work did not apply a microfluidic device to the study of transmembrane proteins, it laid the groundwork for the eventual design and fabrication of such a device. A better understanding was developed of the fluidic resistance of laser-cut microfluidic channels and the resistive effects of droplets occupying those channels. Improvements to the droplet trap design process were made by adapting models of microfluidic droplets splitters to the design of droplet traps. With these lessons, a laser-cut polymer microfluidic device capable of generating DIBs to study transmembrane proteins may be effectively designed in the near future.

Zachary Strike (2022). Preliminary Development of a Microfluidic Tool for the Characterization of Molecular Machines. UWSpace. http://hdl.handle.net/10012/17838