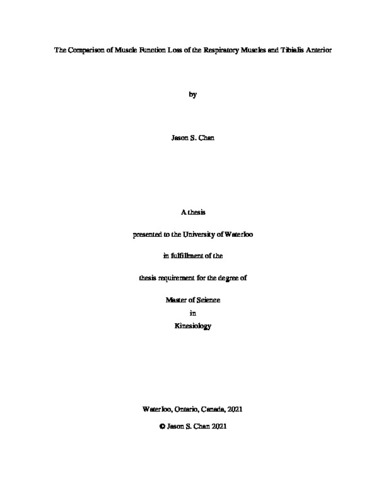 The respiratory muscles (RM) sustain life by maintaining ventilation but may atrophy faster than other skeletal muscle. Respiratory muscle training (RMT) improves RM strength and attenuates the RM metaboreflex. However, the time course of muscle function loss after detraining is less known. We sought to determine the time course of change in RM strength compared to another skeletal muscle and the respiratory muscle metaboreflex in response to 5 weeks of RMT and 5 weeks of detraining. An experimental group (2F, 6M; 26±4yrs) completed 5 weeks of RMT and tibialis anterior (TA) training (each 5 days/week at 50% of maximal inspiratory pressure (MIP) and 50% maximal isometric force, respectively) followed by 5 weeks of no training (detraining) while a control group (1F, 5M; 24±1yrs) underwent no intervention. Prior to training, post-training, and post-detraining, all participants underwent a resistive breathing task (RBT) to failure (breathing frequency:15 bpm, at 60% MIP, duty cycle 50:50) while heart rate (HR) and mean arterial blood pressure (MAP) were measured. The control group had no change in MIP from pre-training to post training (p=0.191) but a small increase from pre-training to post detraining (+11±8%, p<0.05) and no changes in TA across pre-training, post training and post detraining. The control group had no changes in HR (p=0.156) and MAP (p=0.758) response during the RBT on post training and post detraining compared to pre-training. Five weeks of training increased RM (18±8%, p<0.05) and TA (+34±15%, p<0.05) strength and both remained elevated after 5 weeks of detraining (MIPpost vs MIPpost-detraining: 154±31vs 153±28 cmH2O, respectively, p=0.853; TApost vs TApost-detraining:86±19 vs 85±16N, respectively, p=0.982). The rise in HR was trending but not significantly attenuated after training and detraining (-11±14% and 4±17%, respectively, p=0.059). However, the rise in MAP during RBT was attenuated post training (-11±17%, p<0.01) and persisted after detraining, during the time matched, final minute of RBT. In conclusion, RM and TA have similar temporal strength gains and the attenuation of the respiratory muscle metaboreflex remains after 5 weeks of detraining.