The Role of Activities of Daily Living in Healthy Vascular Aging 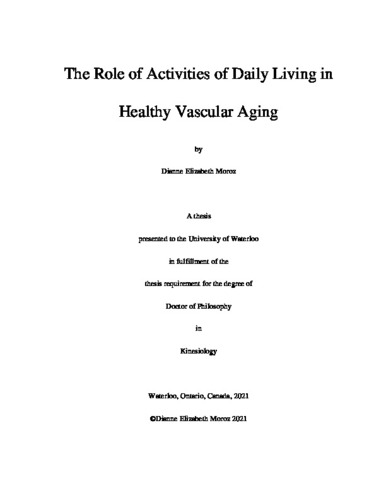 Normal aging leads to endothelial dysfunction and arterial stiffening implicated in cognitive decline. Cerebral blood flow also declines with aging. Elevated blood flow during exercise produces laminar shear stress which is known to enhance endothelial function, slowing age-related arterial stiffness. Exercise in young adults (YA) is associated with a reduced risk of cognitive impairment later in life. Most young and older adults (OA) do not engage in regular exercise. It is not known whether activities of daily living (ADL), including usual pace walking, are strenuous enough to elicit cerebrovascular responses that may elicit shear-induced improvements in endothelial function. Therefore, a primary purpose of this study was to determine the response of blood velocity in the middle cerebral artery (MCAV) to ADL. Participants performed ADL in the lab. Usual pace and fast walking were strenuous enough to increase MCAV, oxygen uptake (VO2), mean arterial pressure (MAP), and end-tidal partial pressure of CO2 (PETCO2) above resting values in young and OA (Chapter 2). Even slow walking elicited these responses in older but not YA. There was no difference in MCAV between usual, slow and fast walking speeds (Chapter 2). The remaining ADL, vacuuming, descending and ascending stairs, and carrying and shelving groceries, were tested in OA only and also elevated MCAV, VO2, and MAP (Chapter 3). On average, ADL were performed at light to moderate intensities. MCAV was shown to increase during ADL but the dynamic response of MCAV to exercise onset is not well understood, nor are the mechanisms responsible for that increase. Literature has described this response as a first order system; however, our data show the increase in MCAV with exercise was not adequately described by a single exponential equation as demonstrated by residuals that were not random and uniformly scattered (Chapter 4). The mechanisms regulating this exercise response of MCAV were investigated during hypocapnia, hypercapnia, and normocapnia conditions. Results demonstrated that the change in MCAV with exercise was adequately predicted by both PaCO2 and MAP (Chapter 4). Together these studies further the understanding of cerebrovascular responses to ambulatory ADL.