Cuffless Blood Pressure Monitoring: Estimation of the Waveform and its Prediction Interval 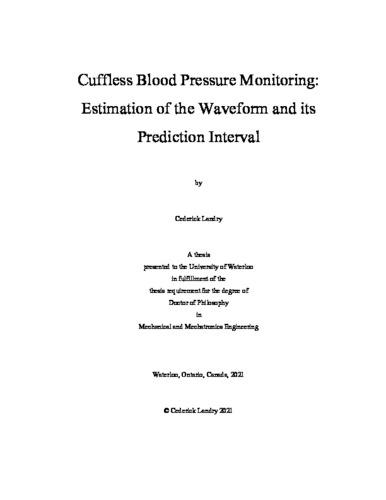 Cuffless blood pressure (BP) estimation devices are receiving considerable attention as tools for improving the management of hypertension, a condition that affects 1.13 billion people worldwide. It is an approach that can provide continuous BP monitoring, which is not possible with existing non-invasive tools. Therefore, it yields a more comprehensive picture of the patient’s state. Cuffless BP monitoring relies on surrogate models of BP and the information encoded in alternative physiological measures, such as photoplethysmography (PPG) or electrocardiography (ECG), to continuously estimate BP. Existing models have typically relied upon pulse-wave delay between two arterial segments or other pulse waveform features in the estimation process. However, the models available in the literature (1) provide an estimation of the systolic BP (SBP), diastolic BP (DBP), and mean BP (MAP) only, (2) are validated solely in controlled environments, and (3) do not assign a confidence metric to the estimates. At this point, cuffless methods are not used by clinicians due to their inaccuracy, the validation inadequacy, and/or the unevaluated uncertainty of the existing methods. The first objective of this thesis is to develop a cuffless modeling approach to estimate the BP waveform from ECG and PPG, and extract important BP features, such as the SBP, DBP, and MAP. Access to the full waveform has significant advantages over previous cuffless BP estimation tools in terms of accuracy and access to additional cardiovascular health markers (e.g., cardiac output), as well as potentially providing arterial stiffness. The second objective of this thesis is to validate cuffless BP estimation during activities of daily living, an uncontrolled environment, but also in more challenging physiological conditions such as during exercise. Such validation is important to increase confidence in cuffless BP monitoring, it also helps understand the limitation of the method and how they would affect clinical outcomes. Finally, in an effort to improve confidence in the cuffless BP estimation framework (third objective), a prediction interval (PI) estimation method is introduced. For potential clinical uses, it is imperative to assess the uncertainty of the BP estimate for acute outcome evaluation and it is even more so if cuffless BP is to be employed outside of the clinic. In this thesis, user-specific nonlinear autoregressive models with exogenous inputs (NARX) are implemented using an artificial neural network (ANN) to predict the BP waveforms using ECG and/or PPG signals as inputs. To validate the NARX-based BP estimation framework during activities of daily living, data were collected during six-hours testing phase wherein the participants go about their normal daily living activities. Data are further collected at four-month and six-month time points to validate long-term performance. To broaden the range of BP in the training data, subjects followed a short procedure consisting of sitting, standing, walking, Valsalva maneuvers, and static handgrip exercises. To evaluate the uncertainty of the BP estimates, one-class support vector machines (OCSVM) models are trained to cluster data in terms of the percentage of outliers. New BP estimates are then assigned to a cluster using the OCSVMs hyperplanes, and the PIs are estimated using the BP error standard deviation associated with different training data clusters. The OCSVM is used to estimate the PI for three BP model architectures: NARX models, feedforward ANN models, and pulse arrival time (PAT models). The three BP estimations from the models are fused using the covariance intersection fusion algorithm, which improves BP and PI estimates in comparison with individual model performance. The proposed method models the BP as a dynamical system leading to better accuracy in the estimation of SBP, DBP and MAP when compared to the PAT model. Moreover, the NARX model, with its ability to provide the BP waveform, yields more insight into patient health. The NARX model demonstrates superior accuracy and correlation with “ground truth” SBP and DBP measures compared to the PAT models and a clear advantage in estimating the large range of BP. Preliminary results show that the NARX models can accurately estimate BP even months apart from the training. Preliminary testing suggests that it is robust against variabilities due to sensor placement. The employed model fusion architecture establishes a method for cuffless BP estimation and its PI during activities of daily living that can be used for continuous monitoring and acute hypotension and hypertension detection. The NARX model, with its capacity to estimate a large range of BP, is next tested during moderate and heavy intensity exercise. Participants performed three cycling exercises: a ramp-incremental exercise test to exhaustion, a moderate and a heavy pseudorandom binary sequence exercise tests on an electronically braked cycle ergometer. Subject-specific and population-based NARX models are compared with feedforward ANN models and PAT (and heart rate) models. Population-based NARX models, when trained on 11 participants’ three cycling tests (tested on the participant left out of training), perform better than the other models and show good capability at estimating large changes in MAP. A limitation of the approach is the incapability of the models to track consistent decreases in BP during the exercise caused by a decrease in peripheral resistance since this information is apparently not encoded in either the forehead PPG or ECG signals. Nevertheless, the NARX model shows good precision during the whole 21 minutes testing window, a precision that is increased when using a shorter evaluation time window, and that can potentially be even further increased if trained on more data. The validation protocols and the use of a confidence metric developed in this thesis is of great value for such health monitoring application. Through such methodology, it is hoped that cuffless BP estimation becomes, one day, a well-established BP measurement method.