Balancing Interests in Regulatory Institutions: A Comparison of the Northern Gateway and Keystone XL Pipelines 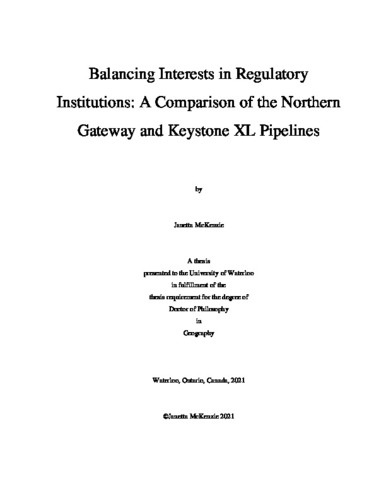 Canada and the United States are facing crucial decisions about the future of their energy resources. The severity of climate change, increasing salience of the social impacts of fossil fuel development, and mounting calls to rapidly decarbonize energy systems have left these two fossil fuel giants at the forefront of international debate. Both countries struggle with balancing these complex socio-environmental problems with the economic benefit that fossil fuels have historically afforded. Ideally, regulatory mechanisms are meant to find this balance through the setting and enforcement of rules. However, these mechanisms have increasingly come under fire in the last twenty years, ostensibly for privileging the economic benefit of a few over the socio-environmental impacts borne by many. The universe of interests has expanded considerably as environmental activists, consumer safety groups, and average citizens become aware of the impacts of this multi-billion dollar industry. These groups and individual citizens have altered the landscape of energy governance as they call for more socially conscious, less environmentally damaging industrial activities. As a result, energy regulation has become increasingly politicized and controversy consistently plagues fossil fuel projects, especially pipelines, in both Canada and the United States. Questions remain regarding the ability of regulatory mechanisms to address an ever-expanding and increasingly complex universe of interests. The overarching objective of this project was to examine how national regulators address cross-jurisdictional issues with broad and diffuse socio-environmental impacts in the context of pipeline governance in Canada and the United States. This thesis compares the regulatory processes for two major, controversial oil pipeline proposals (Enbridge’s Northern Gateway and TransCanada’s Keystone XL), examining public comment data and regulatory compliance documents for both projects. This thesis investigates the characterization and interpretation of three topics by regulators—climate change, energy security, and the public interest—which epitomize the nuance and complexity of contemporary socio-environmental impacts from oil pipelines and how regulatory institutions in Canada and the United States have interpreted these impacts. The first empirical paper asks how climate change is interpreted in regulatory processes for oil pipelines. This chapter concluded that pipeline regulators in Canada and the United States interpret the risks of climate change in extremely narrow and site-specific contexts, despite the global nature of climate impacts. While both regulatory institutions accept that climate change does not respect national borders, both processes assess climate change in a vacuum, focusing mostly on the direct greenhouse gas (GHG) emissions from constructing and operating pipelines. The extent to which climate change is considered for the approval or rejection of these projects is largely left to final executive decision-makers, rather than embedded in regulatory procedures. Ultimately, there is a lack of regulatory certainty and continuity to assessing climate change in both Canada and the United States which renders these institutions incapable of assessing complex global problems like climate change. The second paper asks how energy security is interpreted by these regulatory mechanisms, regarding the public interest, private interest, and government. This paper utilizes the ‘Four A’s’ framework of energy security to compare the characterization of energy security in both cases. Relying on public vi comment data and industry compliance documents, this paper explores the characterization of energy security in both projects and discusses the broader implications for regulatory governance. Ultimately, it is concluded that regulators are (for the most part) emphasizing overly narrow and oil-centric interpretations of energy security, focused on maintaining continuity of a relatively inexpensive supply of oil, and are not integrating more complex energy security issues into their standard assessment procedures. Finally, the third paper investigates how the concept of ‘the public interest’ is characterized and represented in the governance of oil pipelines in the United States and Canada. Several trends concerning the public interest/public participation are identified: first, that the impact assessments required by regulators tend to be very localized in terms of tangible effects, but an increasingly broad perception of social, cultural, and environmental risk that is not well captured by current regulatory mechanisms. Second, that there is a significant lack of understanding of the regulatory requirements and the mandate of regulators, particularly with regards to explicit industry planning and development. Lastly, there is a lack of trust from a significant portion of the general public that believes that regulatory processes are at least partially captured by industry or have no power to make and enforce decisions. These trends all point towards regulatory processes that are out of step with contemporary challenges and problems, and institutions that rely on a narrow interpretation of the public/national interest. This thesis finds that oil pipeline regulators began as market-based institutions, coordinating with industry and the relevant government department to set tolls, tariffs, and other pricing rules. As the universe of interests expanded, encapsulating a wider range of social and environmental impacts, these institutions were equipped with a broader assessment toolkit focused on public safety and environmental protection. However, the fundamental structures of these institutions encourage oil development in support of economic growth, and the evolution of these institutions has not kept pace with the expansion of interests and subsequent impacts. As a result, there are substantial gaps in regulators’ ability to appropriately evaluate complex issues like climate change and energy security, which have diffuse but significant impacts on a wide variety of stakeholders.