Multi-level analysis of school characteristics, based on the Comprehensive School Health Framework, associated with physical activity in a large sample of Ontario and Alberta secondary school students 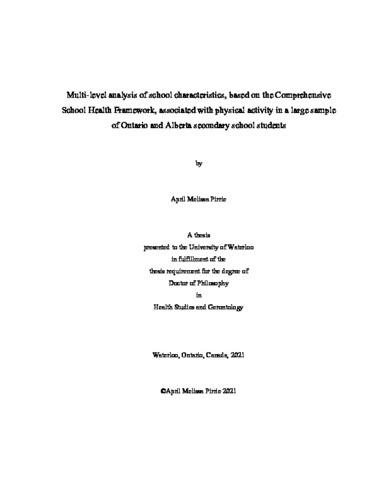 Physical activity (PA) has many physical and mental health benefits, but only 24.4% of youth achieve the recommended minutes of moderate-to-vigorous PA (MVPA). Schools are an important context for changing modifiable health behaviours in youth and the Comprehensive School Health (CSH) framework outlines four inter-related components that schools can strengthen to facilitate better student health: social and physical environment; teaching and learning; partnerships and services; and healthy school policy. There has been no research identified that simultaneously evaluates all four components of CSH and their association with youth PA in a Canadian context. The objectives of this thesis were: (1) describe the prevalence of school-level factors within the CSH framework and their association with student PA (weekly MVPA and meeting the three PA recommendations) in a large sample of Ontario and Alberta secondary schools; (2) examine how youth MVPA changes over a three-year period, stratified by gender; (3) evaluate the school characteristics associated with preventing the decline in MVPA over time, guided by the CSH framework; (4) determine the proportion of students achieving all three PA recommendations at baseline who were still achieving them two years later; (5) determine the proportion of students not achieving all three PA recommendations at baseline who were achieving them two years later; and, (6) evaluate the school characteristics associated with achieving all three recommendations two years later for these two groups of students, stratified by gender. These objectives were met using student and school data from the COMPASS research platform, a large prospective cohort, and reported through a series of three manuscripts. The first manuscript was a cross-sectional study of 37,397 students in Grades 9 to 12 from 80 schools in the 2015/2016 cycle of COMPASS. Using descriptive and multilevel regression analyses (2-level: students within schools), it examined the prevalence of school characteristics guided by the CSH framework and the association between these characteristics and student PA. While some school characteristics were found to be nearly universal (e.g., presence of gymnasiums), many varied between schools, allowing for further analysis. School characteristics within all four pillars of CSH were significantly associated with PA for at least one student subgroup (gender/grade). The second manuscript was a longitudinal study of 17,661 students from 78 schools in the 2013/2014, 2014/2015, and 2015/2016 cycles of COMPASS who were in Grade 9 or 10 in 2013/2014 and participated for at least two of the three years. Using multilevel regression analyses (3-level: repeated measures within students within schools), this manuscript examined the association between school characteristics within the CSH framework and slope of weekly MVPA minutes over time. Student MVPA declined significantly across the three years for both male and female students. The school’s social environment, partnerships, and policies were associated with student MVPA over time, however the specific school factors and directions of associations varied by gender. The third manuscript was a longitudinal study of 9,870 students in Grades 9 and 10, from 78 schools, who participated in both the 2013/2014 and 2015/2016 cycles of COMPASS. Using multilevel regression analyses (2-level: students within schools), this manuscript examined the association between school characteristics and achieving all three national PA recommendations after two years (≥60 min of MVPA daily, vigorous PA ≥3 days/week, strengthening activities ≥3 days/week). The analyses were stratified by student gender and baseline PA status. While some school-level variables were associated with higher odds of achieving the PA recommendations (e.g., access to equipment, public health partnerships, staff time for health), other school-level variables were associated with lower odds of achieving the PA recommendations (e.g., providing showers). The findings of this dissertation support that modifiable school characteristics within the CSH framework are associated with student PA and can have an impact on the trajectory of student PA over time. With limited school resources and a need to improve student PA, these findings can inform schools of which improvements could have the greatest impact. Since there was no researcher-led intervention and only naturally occurring variability between schools was examined, there is a greater chance that these changes could be replicated and sustained by schools, which could be supported by communities of practice. Finally, many opportunities for future research have been presented within the dissertation.