Manorial Regulation and Negotiation in a Late Medieval Environment: Land and Community at Herstmonceux, 1308-1440 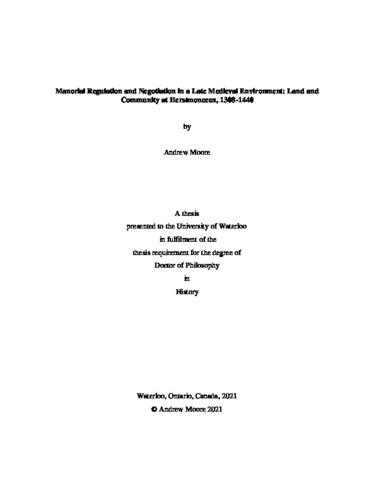 This dissertation examines the role that environment played in the negotiation of rights and responsibilities on a fundamental socioeconomic institution of rural communities in late medieval England — the manor. It analyzes all of the extant documentation generated by the manor, especially a series of fourteenth-century court rolls, and uses it as a lens through which to observe this process. What emerges is a picture of continuous negotiation of power that affected, and was affected by, the environment. Some effects of this process included the creation of new bureaucracies, the increasing standardization of procedure and documentation, and regulations promoting intensive, rather than extensive, land use. This occurred during a period of significant environmental crises, including marshland flooding, disease, and the increasingly unsustainable clearing of woodlands. The manor of Herstmonceux is an especially useful case study for an analysis of the relationship between communities and their environment, as it administered a broad landscape that straddled distinctly different environments, from lowland marshes to upland woods. Prescriptive, often written, initiatives from the seigneurial administration conflicted with custom, much of it oral, and local memory. In this way, the manor court acted as a mechanism of enforcement for the seigneurial administration. Geography also played a crucial role in Herstmonceux manor’s imposition of authority in its periphery. Though much of the demesne utilized lower elevations and wetlands near the manor house, the tenants lived in clustered communities dispersed widely throughout an upland, wooded region. In practice, the court wielded little influence on tenant behaviour over great distances, and especially in dense woodlands, and acted mostly as a source of record-keeping and revenue generation. People grazed their animals widely and trespassed on the demesne frequently, for which the court generally levied a minor access fee, and utilized wood for many purposes, though the sheer lack of prosecutions indicate a lack of enforcement in the manor’s distant woodlands. In contrast, the lord wielded greater control over access to nearby marshland, wherein much of his demesne was located. This influence only grew as royal bureaucracies imposed standardized, written procedures to ameliorate flooding; unsurprisingly, tenants exerted increasingly less autonomy in matters of water management.