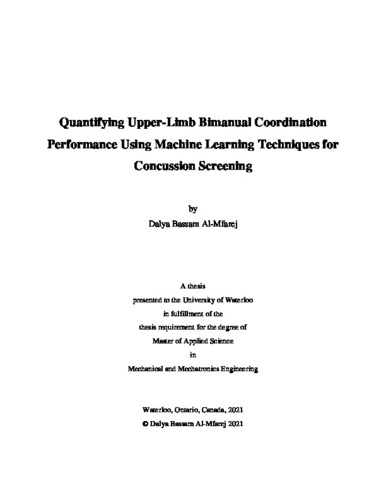 Current concussion screening and diagnosis tools rely on symptom checklist scores, along with subjective assessments performed by a clinician. This introduces high variability and bias, and increases the chances of missed diagnoses, which could lead to inappropriate return to play decisions resulting in dire consequences on the athlete’s health, especially in the case of a second hit. While limited, objective measures for motor assessment exist, they are generally infeasible for use as sideline screening tools. Impaired bimanual motor coordination is one of the major motor deficits that individuals with a concussion can experience. Measuring the degree of impairment in bimanual coordination could be an effective metric for concussion screening. These metrics would provide objective means for sideline screening that are more effective than the currently employed subjective assessments. However, bimanual coordination metrics that are sensitive to concussion remain unknown. Furthermore, a feasible testing paradigm that permits obtaining such metrics on the sideline is also lacking. This thesis contributes the design and evaluation of a novel tool that can be implemented and used in practice, on the sideline of sporting events, to detect coordination impairment associated with concussion objectively. In the first component of this work, a novel testing paradigm for bimanual motor control assessment is proposed and analyzed. Comprising of a simple 1Hz in-phase vertical bimanual movement, the proposed bimanual coordination paradigm requires individuals to integrate multiple sources of sensory information simultaneously (i.e., visual, auditory) to produce a successful arm coordination pattern. The most informative metrics or features, including power-based features, and average peak-to-peak distance were extracted and analyzed to identify metrics that are sensitive to motor deficits, pointing to potential concussion. A machine learning model was developed to distinguish athletes with a concussion and on-going symptoms (CON-S) from healthy controls (HC) using the extracted features from their kinematic data. The proposed method was able to identify concussion with an average accuracy of 86% using a logistic regression model, and 88% using an Adaboost classifier. Issues arise with difficulties in acquiring the required kinematic data, wherein tools currently in use for such applications are expensive, limited to laboratory settings and time consuming. Current gold standard methods are dominated by motion capture, which significantly limits the feasibility of using the proposed paradigm on the sidelines. As such, a portable, cost-effective, and rapid method for data collection is essential. One promising alternative is the utility of computer vision techniques. Utilizing such a method would allow data collection to be performed using devices with a camera, such as a smart phone, in a wide range of settings or environments, without the need for extensive calibration or markers like a motion capture system. In the second component of this thesis, a collection tool utilizing computer vision is proposed and tested for kinematic assessment, and its accuracy was compared to a research-grade motion capture device. Using a video sampling at 120 fps, an average peak-to-peak error of 6.96 mm was obtained. The overall proposed system utilizes computer vision to measure arm motion kinematics and assess bimanual motor coordination, which is expected to deteriorate following a concussion. Proof of concept analyses indicate that the extracted features are able to identify concussion effectively. This tool would be of benefit for quick, portable, and objective sideline concussion screening which has the potential to reduce missed diagnoses and inappropriate return to play decisions to prevent further injury.