Fundamentals of SPME extraction of tissue and plasma: experimental and in-silico approaches 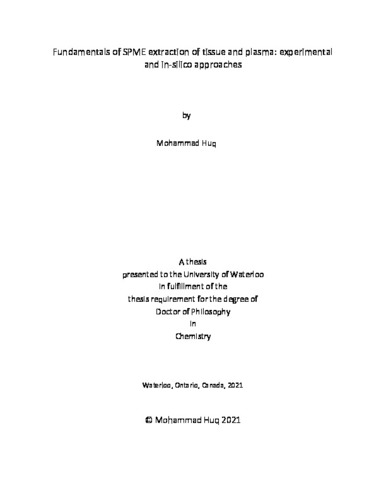 Over the last three decades, solid-phase microextraction (SPME) has continuously evolved and received recognition as a useful tool in various scientific fields. Notable applications have been published including environmental analysis, in vivo drug monitoring, direct coupling to mass spectrometers, and analysis of complex biological samples such as tissue matrix, etc. Much of this success stems from the intrinsic simplicity of SPME’s use, variable configurational geometry to promote experimental suitability, and most prominently, the ability to extract target analytes selectively via the free concentration. However, the theory and concept of SPME are much more complex than its simple practical handling. Rigorous fundamental and experimental studies are required before optimizing SPME to facilitate the simplification of many analytical applications. Computational models are required to reduce the extent of experimental studies and refine theoretical concepts. In this regard, numerical models have been increasingly used in SPME over the last six years. In particular, understanding how the mass transfer is controlled by the thickness of the extraction phase, the shape of the SPME device, and the important effect of the presence of binding matrices in samples. In this thesis, computational models were developed to demonstrate how binding matrices contribute to the mass transfer of analytes to the SPME extraction phase. Chapter 1 provides an overview of matrix components, SPME, and the use of computational modeling. Chapter 2 describes the SPME mass transfer kinetics in the biological tissue matrix. The anticancer drug doxorubicin (DOX) was chosen as a model for this study. Its activity is controlled by the free concentration in the extracellular space that crosses the cell membrane to bind with a specific receptor. However, the distribution of DOX in the tissue matrix is very dynamic as it binds heavily with human serum albumin (HSA), cell membrane, and other macromolecules. It is cleared from the body through renal excretion. Therefore, the total concentration measurement followed by conventional analytical methods does not represent the bioactivity of DOX in the tissue matrix. Accordingly, a suitable analytical technique was developed for the determination of the free in situ concentration of DOX in the extracellular space where it is bound to multiple binding matrix components. Commercially available mixed-mode bio-SPME fibers using coating consisting of C8 and weak cation exchange (WCX) materials were used to extract DOX via the free form from a surrogate tissue matrix – bovine lung tissue. Computational models were developed to determine the mass transfer of DOX during extraction and how binding matrices control the distribution of DOX in the tissue matrix as well as the mass transfer onto the extraction phase. The investigations revealed that DOX is 99.97% bound to the tissue matrix, with its free concentration profoundly depleted in the extracellular space. The free concentration was not affected by the mass transfer to the extraction phase due to instant release from binding matrices, which indicated that binding matrices serve as a reservoir of DOX. 3D computational models were developed in COMSOL Multiphysics based on experimentally obtained physical parameters and available literature values to demonstrate the mass transfer between different reservoirs in the tissue matrix. The development of computational models involved experiment-based simulation of DOX extraction in matrix-free solid medium (agar gel) at static conditions, followed by extraction of DOX spiked in PBS solution to demonstrate how convection contributes to the mass transfer. Finally, a computational model was developed to demonstrate the effect of the HSA binding matrix on the mass transfer of DOX under agitation conditions. Results showed that mass transfer in tissue was faster than during extraction from even agitated PBS solution without HSA binding matrix, implying that binding matrix contributes to the mass transfer through releasing bound analyte within the boundary layer. Furthermore, a computational model was developed to demonstrate the mass transfer in the tissue matrix. The results showed that mass transfer in tissue is profoundly faster than agitated extraction in PBS solution with HSA binding matrix, even though it takes place in static conditions. This study demonstrated how the binding matrix controls the mass transfer and distribution of free analyte that is of interest to quantitative pharmacokinetics and pharmacodynamics. In Chapter 3, SPME was used to investigate the complex binding equilibrium between fatty acids (FA) and HSA. HSA is the main cargo molecule for FAs in the human body and in normal physiological conditions, almost 99% of FAs are bound to it. HSA has multiple FA binding sites, which are heterogeneously distributed in three structurally similar domains of HSA. The affinities of these binding sites are not identical, which results in multiple binding equilibria with FAs, dependent on the ligands’ initial concentration. The binding characteristics of FAs with HSA could be altered by the allosteric modification which is related to important pathological information. The requirement of accurate measurement of free FAs has been fulfilled in this study by SPME, due to the technique’s capability to determine the free concentration in complex matrices. Both site-oriented and stoichiometric approaches were used to analyze the binding characteristics. Computational models were developed to demonstrate the mass transfer kinetics of FA within the HSA binding matrix. The apparent binding constant of FAs to HSA was determined followed by a Scatchard plot and used to simulate the extraction kinetics of FAs. In-silico results demonstrated good fitting with experimental data, which indicates the reliability of this method. Also, stoichiometric binding constants were determined using a nonlinear least-square regression model. The overall work reported in this thesis reflects on experimental and computational approaches of SPME techniques to measure the mass transfer of free analyte from complex matrices where the analyte is involved in multiphase equilibria with binding components that control the rate of mass transfer to the extraction phase.