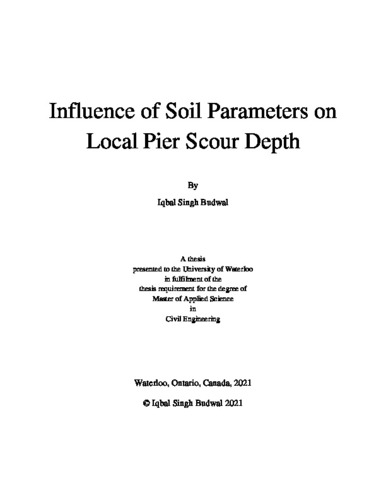 Bridge scour is a phenomenon where erosion of the sediment bed surrounding bridge foundation occurs due to fluid forces arising from currents, waves, and turbulence. Scour around foundation components such as piers, piles and abutments may lead to structural instability and possible collapse. Scour has been documented as the leading cause of bridge failures; thus, the prediction, monitoring and mitigation of scour is paramount for safe and cost-efficient bridge design. The current methods of estimation of pier scour do not properly use information about soil parameters in the calculations. However, soil parameters among other factors play an important role in the scour process. Neglecting inputs of soil parameters leads to significant underestimation of pier scour depths and overtly expensive bridge foundation designs. To develop more accurate methods of scour prediction, parametric studies are required to systematically investigate the effects of soil parameters, such as grain size distribution, mineral composition, cohesion, angle of repose, and void ratio, and incorporate them in the scour prediction equations. Most published scour studies utilized scaled down laboratory experiments although there has been some limited research on scour using numerical simulations. Numerical studies on scour are less expensive and provide the opportunity to investigate a wide variety of scenarios through systematic parametric studies. In this thesis, a comprehensive review on the existing bridge scour theories and scour estimation methods are made. Subsequently, numerical simulations of pier scour are performed using the software SSIIM. Parametric studies are conducted using SSIIM to quantify the influence of sediment parameters on pier scour and to provide recommendations on the most appropriate scour prediction methods. The review performed in this thesis covers the existing literature on scour including the controlling mechanisms and the scour types that occur at bridges. Relevant soil, fluid, and structural factors and their influence on scour are examined. The most influential soil parameters on scour were found to be the grain size, angle of repose, and cohesion. However, the only soil parameters currently considered by empirical methods is the grain size or gradation. Also discussed in detail are the common empirical equations used for estimating equilibrium scour depths and scouring rates. The review covers laboratory-scale studies, numerical modeling, and soft computing techniques, such as artificial neural networks, used to investigate scour. A brief discussion is made on scour monitoring techniques and countermeasures to mitigate scour. Numerical simulations in this study were performed using the software SSIIM (Sediment Simulation in Intakes with Multiblock option). The ability of SSIIM to estimate pier scour was first investigated and the optimal modeling parameters required for accurate predictions of scour were determined. It was found that SSIIM was able to accurately model flow past piers with rigid beds and predict equilibrium scour depths with errors not exceeding 12.6% when compared to observed experimental scour depth. A parametric study was subsequently conducted using SSIIM investigating the effect of soil parameters on pier scour depths. To cover a range of structure sizes, numerical domains were created with pier diameters set as 0.1 m, 0.25 m, 0.5 m, and 0.8 m. Each of the four piers were simulated with two flow intensities of 0.5 and 0.75 for a total of eight flow scenarios. Each flow scenario was simulated with 16 different types of soils for a total of 128 cases. The soils tested were clean sands with control parameters of a 1 mm grain size, 30° angle of repose, and 0 Pa cohesion. While two soil parameters were kept constant, the third was varied to investigate the influence on scour depth. The scour depths for ten grain sizes were examined to evaluate the performance of 12 empirical methods for predicting pier scour. Of the empirical equations examined, the TAMU (Texas A&M University) method was found to be the best scour depth prediction equation. The angle of repose was modeled using stable slope angles between 20° and 40°. Variation of the stable slope angle was found to vary scour depths by -41.9% to +145.1%. Cohesive strength was added to the sediment to simulate the presence of fines and was found to significantly impact scour depths. A cohesion of 0.5 Pa was enough to reduce scour depths by about 90%. The significant variations in scour depth as functions of angle of repose and cohesion highlighted the need for their inclusion in scour prediction equations and methods. Discussions on the SSIIM’s numerical scour modeling established that the current numerical sediment models require improvement in their ability to capture soil behaviour based on the angle of repose and cohesion. Better sediment modeling and accurate numerical scour simulations are required for the development of accurate scour depth prediction models for safe and cost-efficient bridge designs.