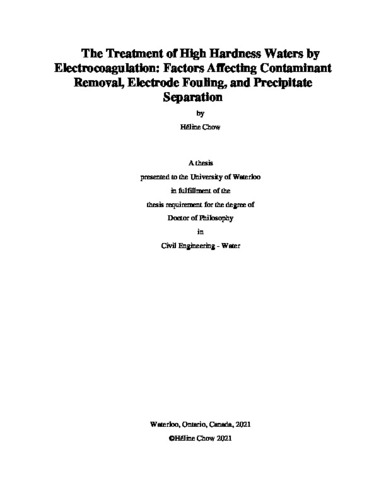 Electrocoagulation (EC) is an emerging electrochemical technology for the treatment of contaminated waters and wastewaters. EC involves the application of electric current to metal electrodes to release metal ions into the surrounding contaminated water. These metal ions form precipitates, which subsequently adsorb contaminants. Compared with chemical coagulation, EC offers several distinct benefits, including lower sludge production, adjustable/controllable treatment rates, low material costs, and reduced energy consumption. EC is especially appealing for the treatment of high-salinity wastewater streams (e.g., oil and gas produced water, hydraulic fracturing flowback) as the addition of more salts to such types of wastewaters is usually not desirable. Despite growing interests in EC, the optimization and implementation of this technology in the water and wastewater treatment sector has been laggard, partly because factors that affect EC performance are still not thoroughly understood. The overall goal of this PhD research is to gain further insights into the potential utility of EC, focusing particularly on answering the following two questions: (1) Can EC effectively treat heavily contaminated wastewater streams consisting of different types of contaminants? (2) How can electrode fouling in EC be mitigated without disrupting the treatment process? In the first research chapter (Chapter 3), the treatment of oil sands thermal in-situ produced water by iron EC (Fe-EC) and aluminum EC (Al-EC) was investigated. Oil sands thermal in-situ produced water is a heavily contaminated wastewater streams consisting of silica, sulfide, and hardness. Effective removal of silica, sulfide and hardness from produced water can reduce corrosion and scaling of steam generators, enhancing water recycling and reuse in the oil sands industry. In Fe-EC, the precipitation of FeS minerals resulted in a rapid removal of sulfide and adsorption of silica onto FeS. In Al-EC, silica was removed via adsorption onto aluminum hydroxides, while sulfide was removed by stripping and electrochemical oxidation. The removal of sulfide was less efficient with Al-EC than with Fe-EC. In Fe-EC, Ca2+ and Mg2+ were removed from the organic-free synthetic produced water but not from the authentic water, likely due to the influence of organic species. Also, contaminant removals in Fe-EC were controlled by charge density but not current density. Overall, the research reported in this chapter suggests that EC can be a promising technology for the treatment of thermal in-situ produced water. In the second research chapter (Chapter 4), the treatment of a synthetic groundwater containing high hardness was investigated, in order to gain insights into how electrode fouling by hardness can be mitigated. Electrode fouling is considered as a major problem in EC because it can cause decreased coagulant production, increased ohmic resistance and energy consumption, and reduced contaminant removal efficiency. Therefore, researchers have put significant efforts into finding techniques to prevent/mitigate fouling. One technique that has gained great deal of interest is polarity reversal (PR), which involves periodically switching the direction of the current such that the anode becomes the cathode and vice versa. Compared with other fouling removal techniques (e.g., mechanical/chemical cleaning, pre-treatment by ion exchange to remove Ca2+ and Mg2+), PR is especially appealing because it allows for the removal of fouling to occur concurrently with the production of coagulant. PR also does not require chemical addition, reactor shutdown, or additional infrastructure other than a current switch. While it has been suggested that PR can help mitigate electrode fouling, conflicting results about the utility of this approach have been reported in the literature. In this research, it was found that operating Fe-EC under the PR mode reduced neither electrode fouling nor energy consumption. Notably, the faradaic efficiency (ϕ) in Fe-EC decreased with increasing PR frequency; ϕ was as low as 10% when a PR frequency of 0.5 minutes was employed. Unlike Fe-EC, operating Al-EC under the PR mode resulted in high coagulant production efficiencies, reduced energy consumption, and diminished electrode fouling. In addition to comparing PR-EC and DC-EC, a novel strategy to minimize electrode fouling was investigated. This strategy involved operating Fe DC-EC and Al DC-EC with a Ti-IrO2 cathode, whose fouling by Ca- and Mg-containing minerals could be readily avoided by periodically switching the current direction. Building upon the investigation with synthetic groundwater in Chapter 4, the effect of PR on coagulant production under other water chemistry conditions was examined in Chapter 5. As in the synthetic groundwater experiments, ϕ in Fe-EC also decreased with increasing PR frequency in the experiments with NaCl, Na2SO4, and synthetic produced water solutions. Notably, ϕ was < 20% in all PR Fe-EC experiments with synthetic produced water. This result suggests that the mitigation of electrode fouling in the Fe-EC/synthetic produced water system by PR does not appear to be a promising strategy, because a low ϕ would be detrimental to contaminant removal. In comparison, ϕ was above 100% (i.e., super faradaic efficiency) in most Al-EC experiments. Given that maintaining a high coagulant production is paramount to the removal of silica (i.e., the main target contaminant in the oil sands thermal in-situ produced water), Al-EC was deemed more promising for the treatment oil sands thermal in-situ produced water. While operating Al-EC under PR can mitigate electrode fouling, the use of high PR frequency should be avoided, as this would result in decreased coagulant production (hence, decreased silica removal), decreased calcium and magnesium removal, and smaller precipitates that would be more challenging to separate post EC treatment.