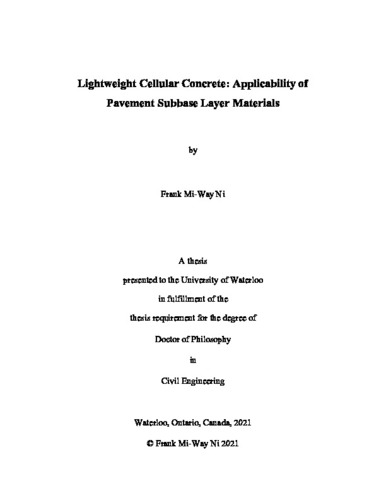 Canada is the second-largest country in the world and has over 1.04 million km of roads. Residents and industries rely on the road network as it contributes significantly to quality of life. Pavement structures built over weak subgrade soil suffers from freeze-thaw and frost heave, this also leads to increased total cost of maintenance and rehabilitation and can also have an adverse environmental impact. Therefore, this research has proposed different solutions to solve these challenges, Lightweight Cellular Concrete (LCC) is one of the materials that has been applied in this type of situation which can provide technical, economic, and environmental benefits. The use of Lightweight Cellular Concrete (LCC) in transportation infrastructure has been growing in recent years. LCC is a versatile material that contains several benefits to pavement construction, such as excellent flowability, good freeze-thaw resistance, and sustainability. As the subbase layer's quality and strength requirements are not as harsh as the base layer, LCC becomes a feasible material to be implemented to protect the weak soil roadbed. However, there is a lack of mechanical analysis and design guidelines for LCC usage in pavement design. The on-field pavement performance is also lacking with the LCC materials. Three different densities of LCC are considered and evaluated in this research. Laboratory tests and pavement performance analysis using different evaluation methods were used in this research. Laboratory tests were performed at the Centre for Pavement and Transportation Technology (CPATT) at the University of Waterloo. The tests evaluated various properties including mechanical properties, durability, microstructure of LCC, and other LCC properties. Overall, it was found that the LCC is a stiffer material compared with unbound granular material but weaker than chemically stabilized base materials. The density of the LCC greatly influences its properties. The 475 kg/m3 and 600 kg/m3 densities were found to have a better pore structure than the 400 kg/m3 density LCC. Moreover, the 475 kg/m3 and 600 kg/m3 densities were discovered to be durable after 180 cycles of freeze and thaw cycling. The pavement performance analysis was performed using three different methods: the failure criteria analysis, granular base equivalency method, and the Mechanistic-Empirical Pavement Design Guide (MEPDG) software. In the failure criteria analysis, LCC sections outperformed the granular subbase section in both fatigue cracking and rutting. The allowable loads of LCC sections were found to be at least 1.6 to 7 times of granular sections, showing that LCC sections' bearing capacity is greater than that of granular sections based on the testing. In the granular base equivalency method, the LCC sections could reduce their layer thickness compared to the unbound granular subbase section by 44% to 65%. MEPDG results showed that pavement with LCC as a subbase layer also demonstrated superior performance than the granular subbase section, especially in heavier traffic road class. 600 kg/m3 density LCC is suitable for major arterial roads with 7,500 Average Annual Daily Truck Traffic (AADTT). On the other hand, lower densities like 475 kg/m3 density and 400 kg/m3 density could be applied in lower-traffic road classes such as major arterial with 5,000 AADTT, minor arterial road, and collector. Therefore, the pavement design using LCC as the subbase layer should consider the road class to determine the density to be used. The main findings from this research are (1) LCC with density above 400 kg/m3 are able to support the pavement, and the traffic could be open after three to seven days when the construction finished. (2) The pore characteristics of LCC were found to be relevant to its mechanical properties. The 475 and 600 kg/m3 densities LCC demonstrated better pore shape than the 400 kg/m3 density LCC. Even though the 475 kg/m3 density LCC had more significant results of circularity and solidity than the 600 kg/m3 density LCC, it was found that 600 kg/m3 density LCC had greater average thickness between pores, leading to a better strength than the 475 kg/m3 density LCC. (3) The 475 and 600 kg/m3 density LCC have excellent freeze-thaw resistance when it can maintain its moisture, this could benefit when LCC is applied in areas that have a higher water table. (3) According to MEPDG and Weslea results, the LCC sections have better pavement performance in rutting and fatigue cracking than granular section and could be considered in reducing the subbase thickness. (4) It was found the 600 density LCC pavement could withstand up to 7,500 AADTT major arterial road. For road classes that have lower traffic volume, lower densities of LCC could be considered. The above analysis showed that using LCC as a subbase material could provide a more durable pavement in Canada.