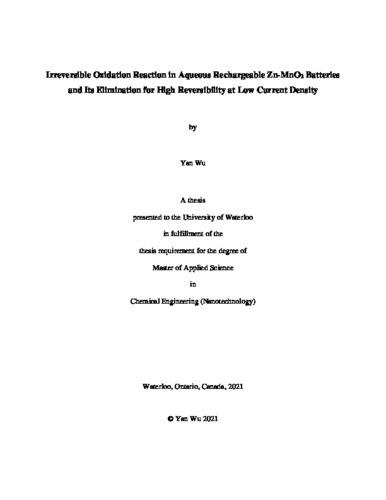 With the ascending requirements of global energy storage, secondary batteries are receiving significant attentions. Lithium-ion batteries (LIBs) have been dominating the market over the decades because of their superior energy density. However, shortages of LIBs such as safety issues, low storage in earth’s crust restrict their applications. Therefore, seeking for alternative battery systems is becoming one of the most urgent topics. Rechargeable aqueous zinc-ion batteries (RAZIBs) are considered as potential candidates for large-scale energy storage because of their remarkable specific capacity from zinc metal (820 mAhg-1), high safety, and environmentally friendliness. Among the choices for cathode materials involving vanadium oxides, sodium manganese oxides, and Prussian blue analogue, MnO2 receives significant attention for its high theoretical capacity (308 mAhg-1 for 1 e- transfer; 615 mAhg-1 for 2 e- transfer) and non-toxicity. Although rechargeable aqueous Zn/MnO2 batteries have been researched for decades, the complicated cathode reactions are still not fully understood, especially the negative influences from the pH fluctuations during cycling and controversial discussions on Mn2+ additives. Additionally, the cycle life of the batteries under relatively low current density is not satisfactory. Hence, a series of experiments are performed in this work to study the reaction mechanism and capacity fading mechanism in Zn/MnO2 batteries. Also, an efficient method on proton regulating to enhance the cycling performance was proposed. Firstly, the main cathode reactions are addressed by characterization methods such as inductively coupled plasma mass spectrometry (ICP-MS), scanning electron microscopy(SEM), transmission electron microscopy (TEM). It is demonstrated that conversion reactions (MnO2 ↔ MnOOH) and dissolution/deposition reactions (MnO2 ↔ Mn2+) are the 2 types of main reactions happening in Zn/MnO2 batteries. Zinc intercalations are not observed according to the characterization results. Afterwards, the irreversible side reactions which cause capacity loss are researched. It is reported in this work that side product from pH fluctuation, zinc sulphate hydroxide hydrates (Zn4(OH)6SO4∙5H2O, or ZHS), can react with Mn2+ ions when charged over 1.55V (vs. Zn/Zn2+). The product generated from this reaction is identified as a lowly crystallized Woodruffite ((Zn,Mn)2Mn5O12∙4H2O, or ZMO), which is also demonstrated to be irreversible and harmful for the battery performance. This reaction is considered as the direct reason for short cycle life of Zn/MnO2 batteries. Therefore, strongly acidic cation exchange resin is used to modify the proton concentration locally (near cathode) and suppress the growth of ZHS side products during discharge process. As a result, the ZHS side product is eliminated at 1.55V (vs. Zn/Zn2+) during charge process, and the irreversible reaction is hence inhibited. Without the undesired side reaction, the proposed battery with ion exchange resin can achieve significant improvements in both cycling performance and Coulombic efficiency at low C-rate, compared with the batteries without ion exchange resin.