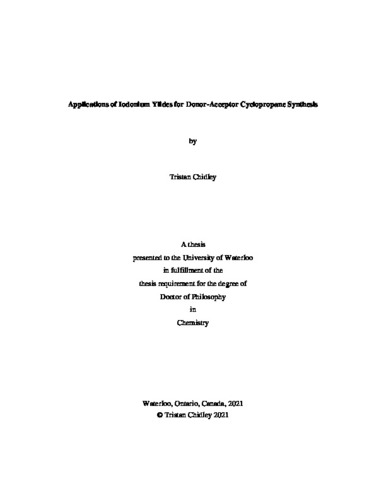 The application of hypervalent iodine (HVI) reagents in the field of organic chemistry has emerged as a viable option for many different useful organic transformations. There have been many considerable contributions made to organic synthesis from HVI reagents, and recently there has been a surge in new and innovative methods of incorporating these reagents into everyday use in the laboratory. The ability to generate donor-acceptor (DA) cyclopropanes in an efficient manner has many benefits for the field of organic synthesis and discovering new efficient methods of synthesizing these compounds using alternative strategies is always useful. In this study, we have found that relatively cheap Wittig reagents can serve as a starting material, which upon reaction with iodosobenzene, approximately 2 equiv can generate monocarbonyl iodonium ylides (MCIYs) in situ which can then go on to perform various reactions, analogous to carbene chemistry. This type of methodology can bypass the more common ways of accessing carbene chemistry which rely on diazo compounds, which do have some disadvantages as some are known to have toxic or explosive properties. Chapter 2 builds on previous research in the Murphy lab that described a new method for accessing unstable MCIYs using a Wittig-type reaction. Wittig reagents (phosphonium ylides) were reacted with iodosoarenes to form the MCIY, which was intercepted by a copper catalyst to form a metallocarbene, which in the presence of an alkene, forms cyclopropanes. This new reaction was published three years before I joined the group, and was able to generate cyclopropanes, but the reaction was not optimized and only gave yields of up to 29%. Unwanted dimerization of the Wittig reagent was occurring as a side reaction, accounting for an additional 27% of wasted material. These problems were addressed by synthesizing iodosoarenes that contain different steric and electronic properties and using them in the Wittig-type reaction to maximize cyclopropanation efficiency. Chapter 3 discusses the application of visible light for activating dicarbonyl iodonium ylides which are then capable of undergoing cyclopropanation with alkenes. Different photoreactors were built from scratch using LED light strips to customize a specific photoreactor setup ideal for this cyclopropanation reaction. UV-Vis emission data of the light source was collected and compared to the absorbances of the iodonium ylides, providing supporting evidence to confirm the reaction was dependant on specific wavelengths of visible light. Subjecting the reaction of iodonium ylides and alkenes to different colours of visible light was also investigated to determine exactly what wavelength of light was required for inducing the cyclopropanation event. It was found that blue light supplied the right amount of energy to activate the iodonium ylide to an excited state, which in the presence of an alkene, formed donor-acceptor cyclopropane system. Red and green light, which are both slightly lower in energy than blue light, were not capable of activating the iodonium ylide, and no observable cyclopropanes were formed under these conditions. The HOMO and LUMO energies of six iodonium ylides were computationally generated, which also confirmed that the energy supplied by blue light should allow for the excitation event to occur. Chapter 4 uses the newly discovered light-mediated cyclopropanation reaction to test the feasibility of establishing an asymmetric variant of the reaction. Chiral hypervalent iodine diacetates were synthesized from asymmetric aryl iodides for use in the synthesis of asymmetric iodonium ylides. Several different types of chiral systems were tested to determine if there was any possibility of using the light-mediated reactions for generating enantiomerically enriched cyclopropanes. The testing of structurally different chiral iodonium ylides was also investigated to determine what structural types would be tolerated in the cyclopropanation rection, and what their effects on isolated yields would be.