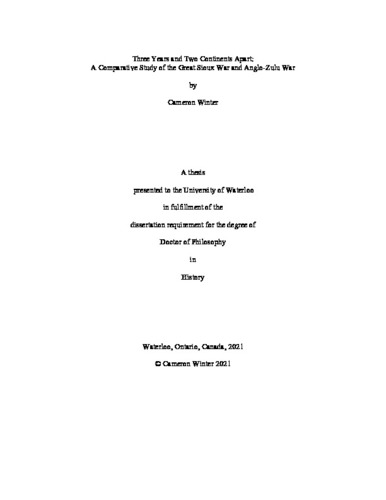 In 1876 and 1879, the American and British armies suffered extremely similar disasters at, respectively, the Battles of the Little Bighorn and Isandlwana. Though these two colonial reversals have often been compared to one another in passing, no serious comparative work on them has been done. This paper aims to change that, while placing both battles within the larger frameworks of their respective wars and arguing that it was the similarities in American and British perceptions of their Indigenous foes that led to the defeats at the Little Bighorn and Isandlwana, as well as the other difficulties that both campaigns encountered. It will be argued that both the American and the British battleplans relied upon the assumption that their enemies would flee from an army of white men and planned accordingly, a belief that led to catastrophic reversals when the Lakota, Cheyenne, and Zulu instead took offensive action. Only by overcoming this detrimental prejudice and adjusting their plans accordingly were the colonial powers able to conquer their Indigenous enemies.