Nationalism in Ghana After 1945: Causes, Actors, and Its Impact on Ghana's Decolonisation Drive. 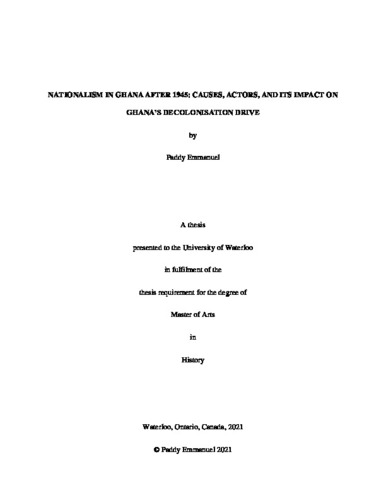 The post- Second World War (WW II) period witnessed an increase in nationalist activities, and activism in Asia and Africa which resulted in the independence of most the colonies in these continents. The declaration of the Atlantic Charter in 1941 which spelt out the right to self-determination contributed immensely to this activism: the charter stated inter alia that it respects the right of all peoples to choose the form of government under which they will live; and they wish to see sovereign rights and self -government restored to those who have been forcefully deprived of them. Indigenous activists and writers in America after the Second World War also encountered ideas about global decolonization and engaged in a process of depicting Canada as a colonizing state, a historical narrative that had not been popularly accepted at that point…, what was later named ‘Red Power’ was a framework that interrogate the specificity settler-colonisation locality and Canadian government policy using globally circulating ideas about decolonization and anti-racism. Thus, the activism and nationalism during and after the WW II against all forms of colonialism was not only prevalent and ubiquitous in Africa and Asia, but also, it was a common phenomenon among the Indigenous people in America and Canada too. The WW II created a global political, economic and social conditions in which both the European colonial masters, and the colonies in Africa in particular responded to those conditions to promote their interest. United States of America (USA) and Russia also responded to the political situation of the world after the WW II which culminated in the Cold War. In effect, the post-WW II created global wind of change, and influenced the internal political, economic and social conditions in both the colonies and the Western Powers. However, there were varying degrees of radical response to the internal conditions of the African colonies under the grip of colonial rule of the European powers after the WW II. Ghana was the first black African country south of the Sahara to gain political independence. It is therefore imperative to interrogate the combining effects of post-WW II political, social, and economic conditions in Ghana, then called Gold Coast, and the Ghanaian Nationalist activities on the decolonization drive of Ghana. This essay examines the interplay of the Ghanaian Nationalists and the post-WW II internal Conditions in Gold Coast, and to a lesser extent post-WW II external factors and how they carved out Ghana’s road to political independence.