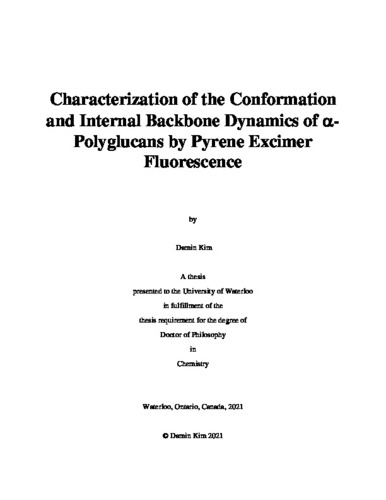 The conformation and internal backbone dynamics (IBD) of several pyrene-labeled polysaccharides (Py-PSs), namely Py-Amylopectin, Py-Glycogen, Py-Dextran, and Py-Pullulan, were successfully examined with a combination of pyrene excimer formation (PEF), fluorescence blob model (FBM) analysis of fluorescence decays, and molecular mechanics optimizations (MMOs). The four Py-PSs were investigated by analysing their fluorescence response resulting from the formation of an excimer upon encounter between an excited and a ground-state pyrene. The fluorescence parameters, namely the fluorescence intensity ratio of the excimer over the monomer, the IE/IM ratio, and the number (Nblobexp) of anhydroglucose units (AGUs) found in the volume probed by an excited pyrene were determined from the analysis of the fluorescence spectra and decays of the Py-PS samples, respectively. MMOs conducted on Py-PS constructs built in silico with the program HyperChem yielded the theoretical number Nblobtheo of AGUs separating two pyrenyl labels, while still allowing for successful PEF. A satisfying match between Nblobtheo and Nblobexp supported the selection of a given conformation of the macromolecule used to conduct the MMOs. These concepts were applied as follows. At first, the compressibility of Py-Amylopectin and three pyrene-labeled Nanosized Amylopectin Fragments (Py-NAFs) with a hydrodynamic diameter (Dh) of 227, 56, 20, and 8 nm was investigated. PEF was applied to probe the changes in dh-h as the side chains of amylopectin were compressed by adding unlabeled NAF(56) (NAF with Dh = 56 nm) to the Py-PSs dispersions to increase the [NAF(56)] from the dilute to the semi-dilute regime. IE/IM and Nblobexp began to increase at a [NAF(56)] of 12 wt%, which was one order of magnitude larger than the overlap concentration. The magnitude of IE/IM and Nblobexp as a function of [NAF(56)] increased with particle size, which suggested that the magnitude of the change in PEF was related to the size of the clusters of helical side chains in the amylopectin interior. MMOs were conducted on a hexagonal close packed array of oligosaccharide helices to assess how Nblobtheo would change as a function of dh-h and the size of a cluster of helices. By matching the Nblobexp values, obtained as a function of [NAF(56)], with the Nblobtheo values, obtained as a function of dh-h and cluster size, a relationship was obtained between [NAF(56)] and dh-h, which allowed the assignment of the number of helices per cluster. Py-Amylopectin, Py-NAF(56), Py-NAF(20), and Py-NAF(8) were found to be made of clusters constituted of 37, 37, 6, and 3 helices, respectively. Considering that all models aiming to describe amylopectin focus on the clusters of side chains found in the amylopectin interior, the methodology developed to determine the size of side chain clusters in amylopectin is expected to become an important analytical tool in the characterization of amylopectin. Second, the combination of PEF, FBM, and MMOs was applied to investigate the density profile of the side chains across the interior of glycogen. Fluorescence Resonance Energy Transfer (FRET) experiments demonstrated that the pyrenyl pendants were distributed throughout the glycogen molecules. PEF experiments on two glycogen samples, that had been labeled with 1-pyrenebutyric acid (Py-Glycogen), yielded an <Nblobexp> value of 34 (±2), which was higher than the <Nblobexp > value of 18 (±1) for Py-Amylopectin. The increase in <Nblobexp> reflected the higher degree of branching of glycogen. MMOs yielded the relationship between Nblobtheo and the local density of a glycogen molecule. Two density distributions based on the Melendez-Hevia model and the Gilbert model were considered to examine the interior of glycogen. According to the Melendez-Hevia model, glycogen is constituted of oligosaccharide branches, that are arranged in concentric tiers with the local density of side chains increasing from the inner to the outer tier. On the other hand, SAXS experiments indicated that the density is highest toward the center of a glycogen particle, as predicted by the Gilbert model. Two density distributions of the local distribution of side chains in glycogen were considered based on both models. The parameters used to model these distributions were optimized to match <Nblobtheo> with <Nblobexp>. Both density distributions resulted in a good agreement between <Nblobtheo> and <Nblobexp> as long as the side chains located in the interior of glycogen experienced a higher density. This study successfully established the PEF-based methodology to examine the density distribution of side chains constituting the interior of glycogen. Finally, two linear polysaccharides adopting a random coil conformation in solution were examined. Dextran and pullulan were randomly labeled with 1-pyrenebutyric acid to yield Py-Dextran and Py-Pullulan, whose Nblobexp were found to equal 9.1 (±0.4) and 11 (±1), respectively. MMOs were carried out to determine Nblobtheo for dextran and pullulan. The good agreement between Nblobtheo and Nblobexp indicated that Py-Dextran and Py-Pullulan were randomly coiled in solution and that Py-Dextran was more extended than Py-Pullulan in DMSO. The IBD of these two polysaccharides were examined with the product kblob×Nblobexp×lSU, where kblob represents the rate constant for diffusive encounters between pyrene labels and lSU is the length of a structural unit (SU). The kblob×Nblobexp×lSU values obtained for Py-Dextran and Py-Pullulan were compared to those obtained for a series of pyrene-labeled poly(oligo(ethylene glycol) methyl ether methacrylate)s (Py-PEGnMAs), where n varied from 0 to 19. kblob×Nblobexp×lSU of the two polysaccharides was smaller than the kblob×Nblobexp×lSU value of a hypothetical Py-PEGnMA sample having a SU with a same molar mass per backbone atom as the Py-PSs. The smaller kblob×Nblobexp×lSU product suggested that these polysaccharides had a more rigid backbone than the PEGnMA samples, which was attributed to the cyclic nature of their SU. Comparison of the products Nblobexp×lSU and kblob×Nblobexp×lSU indicated that Py-Dextran was more extended and dynamic than Py-Pullulan in DMSO. The more dynamic backbone of dextran was attributed to the more mobile a-(1,6) glycosidic bonds constituting the backbone of dextran. In summary, this thesis represents the first example in the literature where PEF has been applied to characterize the conformation and IBD of such a wide variety of polysaccharides in solution. It has extended the realm of PEF applications to a new family of macromolecules and demonstrated the value of PEF-based methods to probe polysaccharides at the molecular level.