Measurements of quantum fields and the Unruh effect: a particle detector perspective 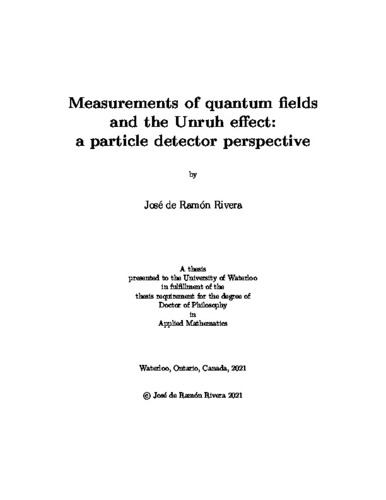 This thesis is devoted to the study of detector models in quantum field theory. A detector model aims to describe a hypothetical physical situation, realistic or not, in which a measurement is performed on a quantum field by means of a quantum mechanical apparatus. The goal is to design a procedure by which one can analyze local features of the field theory with a strong physical base. Within this context, we will analyze the so-called Unruh effect, which states that accelerated observers will experience the ordinary field's vacuum fluctuations as thermal fluctuations at a temperature proportional to their acceleration. The text covers an adapted introduction to quantum field theory and the Unruh effect, which contextualizes and links the original contents developed by the author. These original works discuss the following topics: - A particle detector-based measurement of the two-point function in quantum fields. -Causality issues and impossible measurements in general detector models in QFT. -The non-monotonic behavior of thermodynamic features of accelerated detectors, also known as Anti-Unruh effect. - Robustness of the Unruh effect against ultra-violet deformations of the correlations.