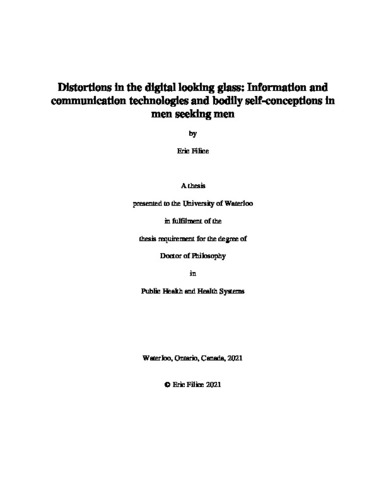 Internet-enabled information and communication technology (ICT) use has become so diffuse as to be considered a hallmark of modern life. Between 2000 and 2019, the proportion of US adults who reported using some kind of Internet-enabled device skyrocketed from 52% to 90%. Sexual and gender minorities, particularly gay, bisexual and other men who have sex with men (GBMSM), are especially keen adopters of certain types of ICT like social media (e.g., Facebook, Twitter, Instagram) and location-based real-time dating apps (LBRTDAs) (e.g., Grindr, Tinder, Bumble) due to the possibilities they afford for circumventing various cultural, geographical, and legal barriers to forging interpersonal connections. However, use of such technologies is associated with adverse bodily self-awareness, including body dissatisfaction, body shame, and appearance preoccupation, as well as maladaptive body behaviours. To date, insufficient effort has been made to derive a mechanistic explanation for the relationship between ICT use and bodily self-conceptions in GBMSM. The overarching purpose of this dissertation research is to investigate how use of certain popular Internet-enabled ICTs, including social media and LBRTDAs, influences bodily self- conceptions in GBMSM – a group who are not only particularly keen adopters of such technologies, but are disproportionately burdened by issues of body consciousness. The effort is spread across four studies, each of which address more specific questions and/or particular facets of this broad phenomenon. Generally, the works included in this dissertation adopt a symbolic interactionist, qualitative methodological approach based on in-depth, semi-structured interviews conducted with a purposive and theoretical sample of ICT-using GBMSM. When taken together, the findings illustrate a jointly-constructed standard among contemporary North American GBMSM that elevates the body as something to be perfected for aesthetic and sexual consumption, and frames as ideal the White, fair-skinned, trimmed or hairless, muscular-mesomorphic, cisgender, able body. In terms of their influence on individuals’ bodily self-conceptions, ICTs like social media and LBRTDAs function as another medium for sociocultural influence, which is to say, a platform through which individuals can be exposed to social behaviours that reflect and (re)constitute the prevailing standards. Where ICTs differ from in-person interaction as to have a demonstrable, largely deleterious effect on users’ body attitudes is with respect to how frequently and intensively the subject is confronted with the standard. Receipt of appearance-related feedback, comparison against particular others, and switching of conscious attention to the embodied self are phenomena that similarly induce comparison against the standard and which occur more often and/or to greater effect online. This is partly a consequence of changes to human behavioural routines stemming from perception of technological affordance, many of which relate to self-presentation, or the deliberate attempting to influence others’ perceptions of oneself. These include, inter alia, feelings of disinhibition to behave in otherwise face-threatening ways, which embolden critical appearance-focused commentary, as well as the potential for enhancement of the self-image beyond what is possible offline, which prompts reflection on one’s own imperfections and makes onlookers feel even more inadequate by comparison. However, these effects inevitably also come into tension with the human agency of the user, hence why the psychological outcomes of ICT use are neither total nor uniform. Users can resist to compare themselves to the standard as reflected by others’ behaviour, critique the prevailing standard, and/or internalize all manner of alternative standards according to their goals and values. The included works make numerous substantive, theoretical, and methodological contributions to the literature. Study 1 is the first to provide any kind of theoretical framework that explains how use of social media and LBRTDAs influences bodily self-conceptions in GBMSM; studies 2 and 4 to empirically investigate the mechanisms underlying the relationship between LBRTDA use and bodily self-conceptions in GBMSM; study 3 to examine GBMSM’s self-presentation behaviour on ICTs by exploring interactions between determinants of impression construction; and study 4 to empirically investigate how self-presentation behaviour as such influences bodily self-conceptions of ICT users in general, let alone LBRTDA-using GBMSM. The implications of the included works for public discourse, policy, industry, and health promotion practice are legion.