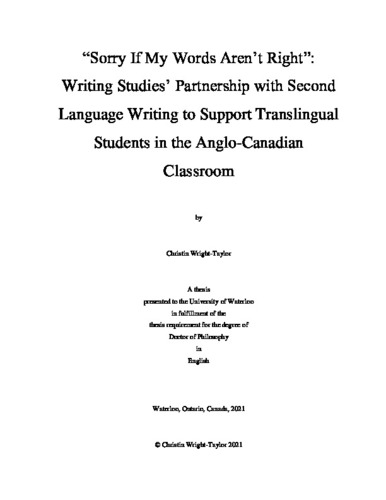 Since the early 2000s, Canadian higher education has recognized the economic benefit of courting and enrolling visa students at higher tuition rates. Austerity measures in federal funding combined with falling domestic enrollment shifted previous partnership models of internationalisation toward a neoliberal agenda wherein students are positioned as human capital. The rising numbers of visa students entering Canadian higher education introduces a new body of linguistically and culturally diverse learners that the academy must integrate into academic discourse. Previously, language competency testing was used exclusively to sort and filter incoming, language diverse students. However, testing fell out of favour with key Canadian institutions enrolling some of the highest numbers of visa students. In place of testing, writing courses have been implemented to help address the language and communication needs of both mother tongue and translingual students. However, without careful implementation and design, writing courses can perpetuate an English Only standard that manifests in the form of the myth of the native speaker. In light of this nascent Euro-centric and white supremist ideology, it is imperative that writing studies scholars draw on existing theories and partnerships to decentralize native speakerism in writing curriculum. One such theory has evolved south of the border in US composition called, translingualism. While translingualism promises to deconstruct ideologies that marginalize language diverse students, it also contains inherent fault lines that threaten to undermine its gains. In addition to these fault lines, translingualism comes out of a specifically American academic history which may not fit well in a Canadian context. For these reasons, this dissertation advises that translingualism be adapted, rather than adopted, to fit writing studies in Canada. More importantly, pre-existing partnerships exist within writing studies to support translingual students, primarily with second language acquisition. An historical narrative of both disciplines reveals that while second language acquisition grew up firmly housed in the faculty of education, writing studies’ decentralized nature created a resilience and ingenuity that allowed the field to reach across disciplinary borders to not only establish itself as a discipline but to survive and thrive to the present moment. One such cross-disciplinary partnership was with second language writing. Unlike composition in the US, writing studies has a rich history of partnership with scholars from second language writing. This partnership holds the key for a language-based, writing model to support translingual students in the Canadian writing classroom.