Masculinity in two reddit men’s communities: Feminism is foul, privilege is precarious, and being beta is bad. 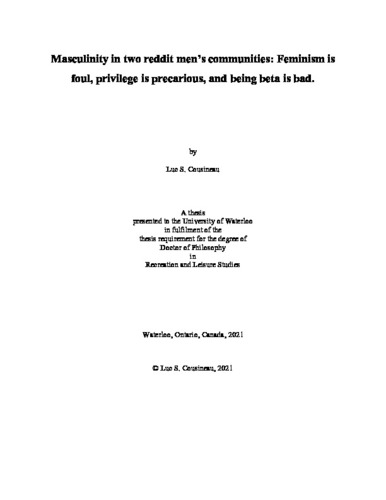 TL;DR Work, social lives, and leisure practices are increasingly digitally mediated, and as more and more of our interactions move online, we seek out platforms and communities where we can share ideas and interact with others. Social networking sites, forums, and other socially oriented digitally networked spaces have created opportunities for communities of shared interest to come together, permitting even the smallest of interest groups to feel as though they have a home and meeting place. One location where this kind of community formation happens readily is reddit.com, a website designed to aggregate content from users and other websites into interest-based collections. Users can join and follow communities about nearly any topic, and curate their experience to show only content that aligns with their beliefs, ideologies, or desires. Along with social groups like fan fiction writers or bird watchers, the ease of gathering and sharing ideas on social platforms like reddit has allowed other niche groups with anti-equity, far-right, and prejudicial views to find community as well. In the case of men’s advocacy and male supremacist groups, this has led to reddit communities in the online manosphere. The manosphere is a loose collection of anti-feminist groups that share a focus on aspects of men’s rights, Western gender traditionalist, or male supremacist ideology. As a set, manosphere group ideologies are less of a continuum from mundane to militant, but rather like a loose collection of affiliated groups. Each manosphere group carries its own understandings about men and masculinities, and these are reflected in the ways these groups welcome (or do not welcome) men representing different versions of masculinity, and accept them as group members and/or as men. With a complicated history, growing numbers, and in some cases feminist roots, the manosphere and its popular constituent groups require examination. The purpose of this research was to explore the discourses of masculinity in two different sub-groups of the manosphere, to compare them, and gain insight into how those discourses influence community ideology. Using digital ethnographic methods, this research examines the discourses of masculinity in the /r/MensRights and /r/TheRedPill sub-communities of the website reddit.com this research engages the following research questions: What discourses of masculinity are embedded in the reddit manosphere spaces of /r/MensRights and /r/TheRedPill, how do they compare, and how are these discourses disseminated and monitored to maintain collective group ideologies? And What role might reddit play, through /r/MensRights and /r/TheRedPill, in connecting manosphere communities, and pushing users toward more radical viewpoints about gender and power? The ongoing act of conducting this research in a digital setting also generated a third question: What indicators or guideposts would have been useful as a novice digital qualitative researcher to help me better plan, develop, conduct, and theorise my digital ethnographic research? The introductory chapters introduce the area of study, reddit, and the men’s rights movement, as well as share the theoretical perspectives and methodological approach that frame the project. These chapters are followed by three manuscripts that present empirical refractions based on my research, as well as the development of a digital ethnographic theory-method. The first manuscript chapter, “Entitled to everything responsible for nothing:” Gendered Discourses of Antifeminism, Biological Determinism, and Violence in Reddit’s Manosphere, explores how the three mainstays of antifeminism, biological determinism, and violence provide covert and overt support for men’s rights and supremacist rhetorics on reddit. In this chapter I examine how these discourses are gendered to contrast ‘natural’ male superiority with the perception of male subordination in a feminist society. The second manuscript, “A Positive Identity for Men”? Pathways to far-right participation through /r/MensRights and /r/TheRedPill, positions reddit’s affordances as important contributors to community proliferation. Using the shared ideological commitment to gendered traditionalism of these two reddit communities, and Francisco Bobbio’s (1996) explication of the left-right political spectrum, this manuscript positions /r/MensRights and /r/TheRedPill as far-right communities. Touching on the hard and soft misogyny of these communities as entry points into ideological pipelines, it locates reddit as a perpetuating force for far-right conversion and progression. The third manuscript is a refraction of my methodological struggles in collection of empirical materials, and the theoretical development of a way to think through the complexity of doing research in digitally mediated contexts. Application of a Digital Ethnographic Assemblage Theory-Method – the Research Technoassemblage explores the challenges of using ethnographic methods in online-only communities and the messy intersections of technological systems, people behind the users, the person behind the researcher, and our (presumed) willful ignorance of that complexity. It concludes with a call for research that recognizes and better addresses the need to see and understand these complexities in all research with digitally mediated components. I conclude with a reflection on where to go from here, stepping forward with this research into continued exploration of digital complexity and how it affects gender, masculinities, and men’s rights groups. The final chapter brings together the introductory chapters and manuscripts, and reviews their contributions to the study of men’s rights, far-right, and manosphere communities, as well as leisure and leisure research. It re-situates the importance of studying contentious groups like those studied here, and re-positions me as a researcher relative to the groups that I study. It concludes with reflections for leisure researchers to consider, as well as avenues for future inquiry that were illuminated by the findings from this study, including: the need for more Canadian-focused study of manosphere and far-right groups; the need to better study and map masculinities within the manosphere; the need to interrogate and work with empathy as a researcher of contentious worldviews; and a call to be more thorough and considered when conducting research in and on online communities.