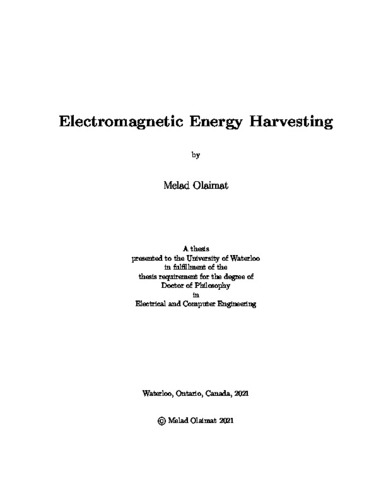 The advent of rectenna systems has opened the door for many applications, with the main goal of harvesting electromagnetic waves. Many designs have been presented to provide a high conversion efficiency. Some works have been focused on the antenna part, where a high-efficient electromagnetic wave to AC conversion can be achieved. Other works focused on the rectification part, where a high-efficient AC to DC conversion is desired. Even though each part can separately achieve a high conversion efficiency, connecting both parts can dramatically deteriorate the achieved efficiency. In general, increasing the accuracy of components' characterization leads to a high-performance design. Since the main component in the rectifying circuit is the diode, an accurate model for a nonlinear system is required for efficient use of computer-aided design (CAD) technology. Currently, many models of nonlinear devices consist of basic electric elements such as capacitors, inductors, and resistors. However, building such models needs complex measurement procedures to extract the required parameters precisely. Furthermore, it may take a year to develop and validate an accurate model. Considering challenges associated with traditional approaches of modeling, an accurate and relatively easy method based on X-Parameters to model nonlinear devices has been presented. X-Parameters can be measured at different frequencies and at different power levels and stored in one file. The availability of all information in one file enables us to characterize the systems that operate under unstable conditions, such as the rectenna circuits that are used for energy harvesting. To accurately simulate a rectenna circuit, we presented a simulation methodology that calls for modeling the antenna part as a circuit that is fully independent in its characteristics from the remaining parts of the rectenna system. This can be accomplished by using Thevenin’s theorem. According to Thevenin’s theorem, a linear circuit can be replaced with an equivalent circuit consisting of an independent voltage source in series with an impedance. The Thevenin’s equivalent circuit provides all the required information about the antenna. It is important to emphasize that the equivalent circuit of the antenna obtained using Thevenin theory is not affected by the rectenna circuit that connects the antenna to the load. Antennas that can be used both as flat and as curved (conformal antennas) are becoming increasingly attractive antennas because of their wide range of applications. The microstrip patch antenna is one of the most widely used antennas, however, it has a high sensitivity to bending. An antenna with a lower sensitivity to bending is required to avoid the effect of bending on antennas. The metasurface antenna is one of the best candidates to overcome the problem of the antenna's sensitivity to bending. To construct a metasurface, an ensemble of periodic resonators is structured to operate as an effective electromagnetic radiator. In this thesis, we explored the impact of bending on metasurface antennas and microstrip patch antenna arrays.