Condominium Towers: Habitus and alienation in the new urban framework 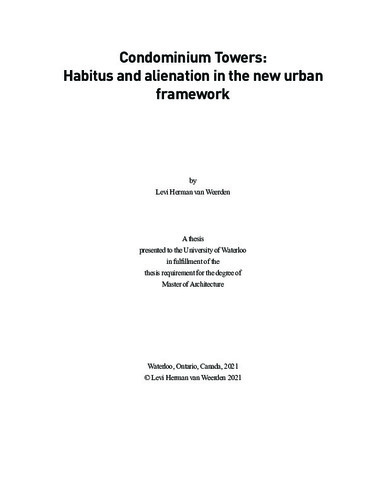 Since 2002, over 180000 new dwellings have been built in Toronto through condominium ownership, filling the downtown core with towers and locking much of the city’s society into a relatively new model of property ownership – the condominium. The social, political, and economic structures necessary to make condominium ownership possible as a strategic form of high-density space production in the downtown, will have a profound impact on how this new residential fabric evolves as an extension of the city. The urban dwelling has traditionally been the starting point for the individual’s belonging and agency within the city. Habitus, as the patterns and banal practices of everyday life, allow people to create places of significance, comfort, and security in dynamic material and political landscapes. Critiques of the condominium as a product of neoliberal private-property narratives, and extreme urban densification as the result of economic, rather than social forces, however, frame the condominium dwelling as a structure that alienates habitus from within the city. As the towers are going to stand within the urban fabric of Toronto for the next fifty to one-hundred years throughout changing social, economic, and political contexts, this condition of alienation will be a key factor in how each tower ages, decays, and is maintained in the urban society. To understand the futures of agency and alienation, each condominium must be considered as a microcosm of the city; first as a fabric of individual dwellings, then as an economic geography, next as a self-contained polity, and finally as a real and dynamic infrastructure. As the product of these four frameworks, we find that the organizational structure of the condominium operates against the human and civic functions of dwelling, and will produce an urban society paralyzed by economics, rather than activated by its own urban condition. While the condominium towers of downtown Toronto are built on economic strategies that alienate habitus from the urban dwelling, this vital dimension can be restored through the telling of alternative narratives of their possible futures that disrupt the preconceptions of the people, space, and future of the towers in the city.