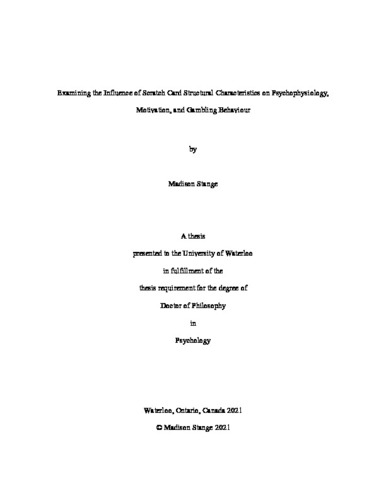 Scratch cards are a popular and accessible form of gambling. Although scratch cards, like other lottery products, are typically cast in an innocuous light, this gambling form contains structural features that resemble slot machines – one of the most harmful forms of gambling available. One of the most striking structural similarities between these gambling forms is the near-miss – a special type of losing outcome which appears to come close to a jackpot win, but falls just short. In a prototypical scratch card game, a near-miss consists of uncovering two of the three required matching top prize symbols needed to win, missing the top prize by only one symbol. Near-miss outcomes are prevalent in scratch cards, and have been associated with increases in physiological arousal and subjective ratings of arousal, disappointment, frustration, and urge to continue gambling relative to regular losing outcomes, despite the fact that these two outcome types are objectively equivalent (like their slot machine counterparts – near-misses are monetary losses). Although the literature on slot machine near-misses suggests that these outcomes may prolong gambling behaviour and encourage continued expenditure, it remains unknown how near-misses impact further scratch card gambling. Overall, scratch cards remain relatively understudied in the gambling literature particularly with regard to their psychophysiological, subjective, and behavioural impacts on gamblers despite concerning similarities to slot machines and their widespread appeal. Currently, only one type of scratch card game has been experimentally investigated, despite a wide and ever-changing selection of game types available in the lottery marketplace. Additionally, some evidence has suggested the importance of anticipatory arousal in scratch card near-miss effects, however the time course of these effects as the various symbols in an outcome are revealed remains unknown. Finally, the influence of near-miss outcomes on further scratch card purchases, and consideration of individual differences related to erroneous cognitions and impulsivity have not been addressed in the extant scratch card literature. To address these and other key limitations, the current thesis presents five experiments. In Chapter 2, we compare the influence of two scratch card game types on participants’ psychophysiological responses and find that scratch cards with a protracted anticipatory window lead to heightened psychophysiological responses leading up to the outcome reveal, whereas games without this feature tend to result in heightened responses following the outcome reveal. Chapter 3 extends these findings by further investigating the effects of the anticipatory window on participants’ psychophysiology on a symbol-by-symbol basis, which varied how early within the card the two top prize symbols (the near-miss) appeared, and hence the length of the anticipatory window. The results of this experiment suggest that near-misses uncovered just before the final symbol is revealed (e.g., the shortest anticipatory window) result in the largest increase in physiological arousal of all near-miss outcomes presented. Finally, Chapter 4 presents three experiments focused on whether near-misses lead to further purchases of scratch cards. Although we find no evidence to suggest that experiencing a near-miss is associated with an increase in purchasing behaviour, we did find that purchasers reported higher levels of impulsivity than non-purchasers. Additionally, preliminary evidence suggests that participants’ beliefs about the meaning of near-misses may impact their experience of these outcomes. Finally, across all of the experiments, near-misses reliably resulted in an increased urge to continue gambling relative to regular losses. In conclusion, the present thesis adds to our existing knowledge of scratch card gambling and emphasizes the impact that structural features have on gamblers’ experiences.