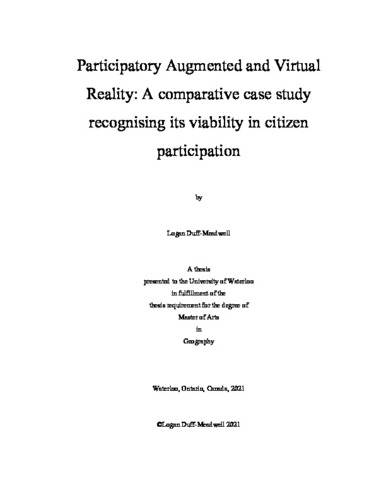 With technology’s growth in recent years, governments have begun adopting new methods of citizen participation into decision-making. New technologies require a deep analysis of their implementation, to understand and identify how it constrains or enables participation. One such technology is augmented and virtual reality (AR/VR). First built in the 1950s, this technology has seen rapid advancements over the past decade, and is now adoptable as a tool in decision-making. Alongside the rise of this technology, few studies have characterised its ability as a participatory tool, which are absent of a general framework for governments to follow. Research has shown the potential upsides and failures of AR/VR, but not sufficiently to determine its impact in citizen participation. This research aims to address this gap in research by exploring cases across North America, in determining the benefits and challenges of participatory AR/VR, and addressing its viability in citizen participation. To meet the research objectives, five cases were identified, combining in six interviews of nine individuals involved in the implementation of the technology. These participants were affiliated with the creation of the renderings, adopting of the technology, and involved in the participatory meetings. The semi-structured interviews revealed that AR/VR characteristics allow it to logically perform well as an urban planning tool, due to its realism, proactive approach to communication, and educative nature in explaining contextual information, but lacks the ability for it to function as a participatory technique, meaning it is unviable in citizen participation. This was determined by addressing characteristics of success which were clouded by shortcomings of the technology. These insights yielded requirements for participatory AR/VR to progress, which involves the adoption of a framework that uses citizen co-production, realism, interactivity, immersion, gaming engines, and real-time feedback curation. It was concluded that AR/VR must follow a distinct structure to function as a viable participatory technique. If it strays away from a framework, it loses its participatory capabilities and simply becomes a visualisation beneficial in disseminating complex contextual information. Overall, this study demonstrates AR/VR has potential in citizen participation, and expresses a set of best practices recommended for future government adoption.