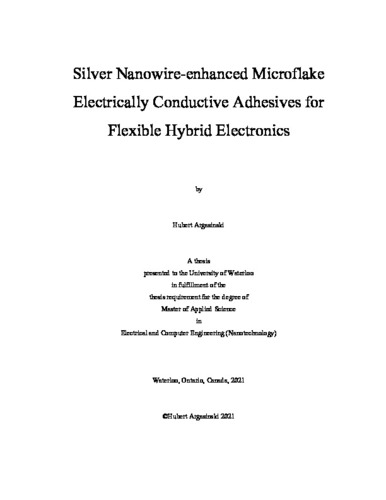 Flexible hybrid electronics combine the power and performance of conventional integrated circuits with the large area, lower cost, and mechanical flexibility of printed, flexible electronics. To mount rigid, discrete components on printed, flexible circuits, a conductive, flexible, and mechanically binding interconnect is required. The high processing temperature of solder, the gold standard for conventional electronics, is not compatible with mechanically flexible substrates such as plastics, textiles, and paper. Furthermore, solder is brittle and lead-based solders are slowly being phased out due to new environmental regulations. Electrically conductive adhesives (ECAs) are one of the most promising alternatives to solder for flexible hybrid electronics since their low processing temperatures are compatible with flexible substrates. However, ECAs are brittle and their resistance greatly increases upon repeated strain, which is not ideal for bendable devices. And although they exhibit excellent conductivity, it is still not as high as solder. Silver microflakes are the most commonly used conductive filler in ECAs, however, the flakes lose contact with each other under mechanical strain. In this work, silver nanowires are added to microflake ECAs as an auxiliary filler to improve the flexibility and conductivity of the ECA. The silver nanowires bridge neighbouring microflakes improving the conductivity, and the long reach and flexibility of the nanowires can maintain an electrical connection under strain. The fabrication procedure, as well as the concentration and dimensions of the nanowires, are studied and optimized for flexible ECAs. Ultrasonication is one of the most popular mixing methods for ECAs but it is found in this work that the nanowire-containing ECA is sensitive to the duration. During the initial phases, up to 10 min., the sonication works to disperse the conductive fillers in the epoxy resin, which is beneficial, while beyond 10 min. the sonication damages the nanowires, degrading their performance. The next parameter of interest was the nanowire to microflake ratio for a fixed silver content. If too little nanowires are added, the ECA underperforms, and if too many nanowires are added, they agglomerate on the surface of the microflakes. It was found that the optimal nanowire to microflake ratio for long and thin nanowires was 1:5, and 1:4 for short and thick ones. Lastly, it was found that the longest and thickest nanowires show the most improvement in the electrical and mechanical properties of the ECAs as their larger diameter makes them more resilient to damage and their long reach helps keeps the network in contact when stretched. By narrowing in on the steps and parameters relevant to nanowires, resistivities as low as 3.9 x 10-4 Ω∙cm are achieved, compared to 1.9 x 10-3 Ω∙cm for the baseline flake-only ECA. After 100 cycles to 30% strain, the resistance of the hybrid nanowire/microflake ECA increased only 9.8x, compared to 25x for the flake-only ECA. The hybrid ECA demonstrated a higher maximum elongation of 120% compared to 75% for the flake-only ECA. Meanwhile, a commercial ECA broke while being strained to 30%. Shorter and thicker nanowires showed better shear strengths than longer and thinner nanowires, but the shear strength of all the hybrid ECAs was lower than the flake-only ECAs. However, it is demonstrated the strength is still sufficient in a real-world device by integrating a light emitting diode on a flexible substrate using the ECA. The device using the pure flake ECA broke after 256 cycles to 20% strain, while the device using the hybrid ECA showed no change in intensity after 500 cycles.