The Rebirth of Rape: Tracing Ovidian Rape Motifs with Respect to Bernini's Pluto and Persephone as a Piece of Classical Reception 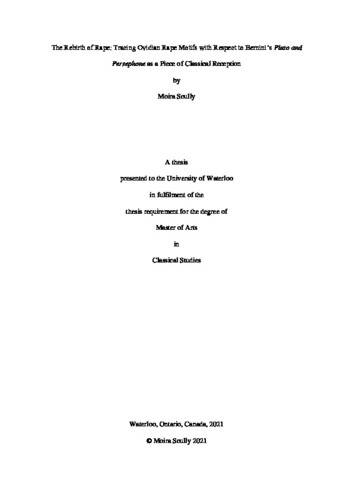 Rape, as it is understood in a modern context, is approached with a completely different perspective than that of an ancient, and even a post-Renaissance, audience. With the contributing factors of cultural, historical, and educational aspects all playing a role in shifting how this act of sexual violence was perceived from a pre-modern to a modern society, it is possible to identify the gradual process that went into rethinking rape. The question arises, however, if there is a similar shift in both the perception and reception of rape between first century Augustan Rome and the city-state of Rome in the early seventeenth century. By selecting two influential pieces depicting the act of raptus, this study examines ‘Roman’ cultural perceptions of rape cross-temporally and attempts to reveal if sexual violence was viewed similarly or differently by the succeeding Roman culture. Using both Ovid’s Metamorphoses and Gian Lorenzo Bernini’s Pluto and Persephone as the main primary sources for this investigation, ensures an opportunity for clear comparisons or discrepancies in reception to be drawn. In addition to these two sources, supporting material such as legal codes, medieval commentaries, translations, paintings, and sculpture, are employed to properly situate both Ovid and Bernini’s works in their respective cultural contexts. Through an assessment of these listed sources, this paper demonstrates the significant overlap in cultural attitudes towards rape in each time period, and how Bernini’s sculpture can be seen as a piece of Ovidian reception for sexual violence.

Moira Scully (2021). The Rebirth of Rape: Tracing Ovidian Rape Motifs with Respect to Bernini's Pluto and Persephone as a Piece of Classical Reception. UWSpace. http://hdl.handle.net/10012/17631