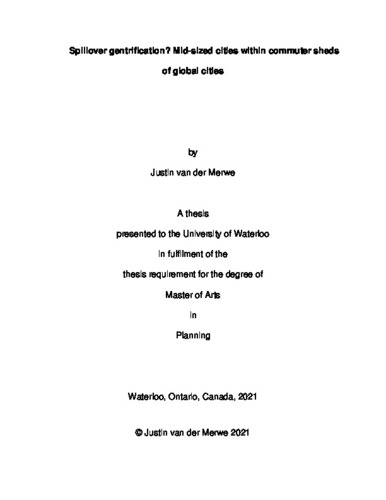 Commuter sheds have long comprised several mid-sized cities surrounding a large metropolis. The smaller cities typically feed into the economic and commuter orbit of the larger city. These ‘bedroom communities’ of the bigger city have housing markets that need to accommodate long-term in-migration, which is something for which they are sometimes ill-prepared. As a result, sustained and sudden increases in migration to these smaller communities can cause distortions in their housing markets, not least for affordable housing. This dynamic displaces those who are struggling, forcing them further down the urban hierarchy. Analyzing the wider region around Toronto, and the role of two prominent mid-sized cities within this system (Hamilton and the Region of Waterloo), this study investigates how gentrification spreads between large and mid-sized cities within a regional commuter shed, and whether the COVID-19 pandemic accelerated a type of tiered and cascading gentrification throughout city regions. The first case examines how gentrification spills over from Toronto into Hamilton’s Lower City neighbourhoods, resulting in the (re)production of neighbourhoods based on a Torontonian middle class identity. The second case examines the established pattern of migration from the Greater Toronto Area into Waterloo Region, and the extent to which the COVID-19 pandemic accelerated this flow while amplifying affordable housing challenges. Considered together, the empirical chapters suggest that planners need to pay particular attention to the systemic pressures accruing between various ‘nodes’ within the urban hierarchy of commuter sheds, as spillover gentrification exerts a discernable pressure down the urban system of these commuter sheds. This thesis therefore makes a call for a wider systemic understanding of the scales of gentrifying capital. Planners in the Greater Toronto and Hamilton Area, as well as in commuter sheds more generally, should focus on the systemic downward pressure caused by the ebb-and-flow of capital throughout their regions, as it valorizes and devalorizes neighbourhoods and suburbs around global cities. To properly ‘unscramble’ spillover gentrification around global cities, we need a refocusing of planning debates, and directing of future research to the neighbourhood and suburb scale instead of a metropolitan one.