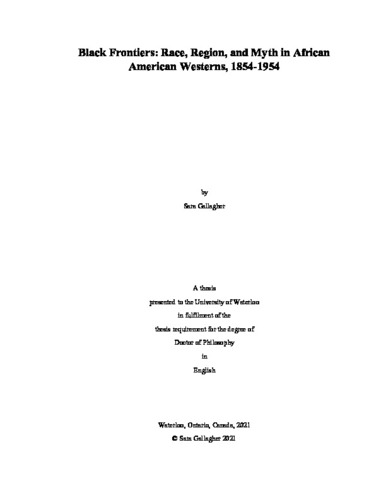 Up until the 1960s the African American West remained largely unexamined in scholarship and, when examined, was marked for its historical absence or, as Eric Gardner notes, “limited to brief biographical asides focusing on the most romantic figures” (Gardner, Jennie Carter, xii). The challenge faced by recent scholarship in Western studies has not only been to recover the works of authors who have remained understudied or unpublished, but also to develop interpretive frameworks that consciously push beyond Anglo-centric visions of the West. One such method is New Regionalism. Espoused by Gardner, New Regionalism emphasizes the role of place and location in the production of a creative text. This approach interrogates the Western genre outside of previous canonical constructions that limit Black presence in literary and cultural history to certain geographic locations (i.e. the South and the Mid-Atlantic) and genres (i.e. the slave narrative). Examining Black textual communities in the West allows scholarship to move beyond acknowledging historical presence, to analyzing how African Americans represent themselves through the Western genre and, perhaps more pointedly, in relation to how they “cite/site under acknowledged Black geographies” (Katherine McKittrick, Demonic Grounds, 111). Each of the texts that I analyze involves migration to a frontier space on the edge of white society, a place where African American authors and cultural producers adapt to race-based restrictions and limitations, sometimes by challenging these restrictions and other times by assimilating into the white society. By revising a narrative structure that is associated with white American culture, they also claim a place in a society that refuses to acknowledge African American participation in and contribution to frontier history and mythology. The body of works examined in this dissertation analyzes a diverse set of stories to show the ways African American authors and producers of Western texts have participated in the revision of the Western genre in a full range of imaginative forms.