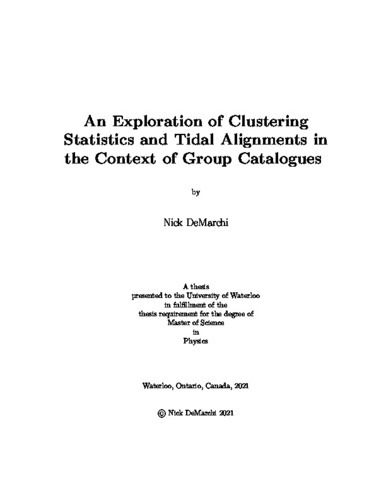 The use of three-dimensional galaxy surveys and large cosmological simulations of the galaxy distribution has advanced our understanding of large-scale structure over the last few decades. At the forefront of this are clustering measurements that seek to determine cosmological parameters including the linear growth function, $f$. When making clustering measurements using group catalogues, whether they be dark matter halos or galaxy clusters, various selections in our catalogues are generally performed that can alter the outputs for our measurements. An example of this is when objects are selected based on a certain mass threshold, a primary bias is introduced that alters our perceived two-point clustering statistics. Additionally, when using spectroscopic data to measure the positions of groups in the Universe, an observational effect caused by peculiar velocities, known as redshift space distortions, can also alter our perceived clustering and create an anisotropic effect in the power spectrum. Furthermore, many recent works have focused on secondary properties, independent of mass, that can alter clustering measurements for groups. In this work, we will explore selection-based contamination effects when finding groups in redshift space with a focus on intrinsic alignments for our selections. The selections used in this work consider halo size as a proxy for its mass and could lead to intrinsic alignments altering the anisotropic signal. We will utilize a current model that includes selection-based effects to the standard redshift space distortion model where this contamination incorporates a dependence on the configuration of the large-scale tidal fields and thus intrinsic alignments. If the selection of our groups is further biased, this can result in systematic errors to $f$, altering growth of structure measurements. To investigate, we primarily use $\Lambda$CDM simulations for dark matter only particles and explore how the selection of groups with preferential halo alignments can produce an anisotropic signal, even in real space. We will also create a variety of mock galaxy catalogues using a halo occupation distribution for our dark matter groups. This population technique is optimized and modified to include similar intrinsic alignment statistics as our dark matter halo catalogue. We will then perform various tests of intrinsic alignments on these galaxy catalogues and attempt to differentiate between anisotropic effects induced by such alignments in our selection with respect to a catalogue that lacks their presence. We find that utilizing various selection-based algorithms produced a weak differential anisotropic signal between these catalogues, most likely as a consequence of significant noise sources. These noise sources will be discussed and potential advancements to the limitations faced are considered for future work.

Nick De Marchi (2021). An Exploration of Clustering Statistics and Tidal Alignments in the Context of Group Catalogues. UWSpace. http://hdl.handle.net/10012/17621