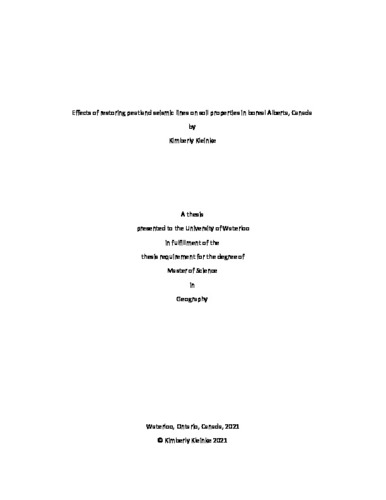 Long, linear disturbances called seismic lines have been and continue to be created through the boreal forest in Alberta for petroleum exploration. Restoration of these seismic lines has shown some success but is often unreliable in peatlands, not resulting in appropriate vegetation recovery. Unrestored seismic lines through peatlands often have a lack of tree cover and shifts in the overall vegetation community. Implications of the lack of tree cover include declining caribou populations due to the increased sight and mobility of predators such as wolves. Additionally, peatlands with seismic lines are observed to shift from important, large C sinks to C sources. The most common restoration method is called mounding; the practice of replicating natural hummocks by digging and building mounds of peat on the lines. The major purpose of the mounds is to create drier microsites for tree growth, which has been successful in upland areas. Mounding methods generally involve inverting the peat profile, which likely exposes older, more decomposed peat. New mounding methods to keep the peat profile intact may prevent changes in peat properties observed with classic, inverted mounding. Understanding the effects of seismic line restoration on soil properties, which in turn drive vegetation recovery, will provide information to better assess the use of mounding techniques. Effects of mounding on soil properties were determined through analysis of surface (0-10 cm) peat samples from seismic lines crossing fens near Cold Lake, Alberta. Peat samples were taken from inverted mounds restored in different years, adjacent low-lying areas on treated seismic lines, untreated seismic lines, and natural areas in August 2019. Further peat samples were used in an incubation study to determine the effectiveness of easily measured decomposition markers as indicators of C loss from mineralization. Additionally, peat cores were sampled from the same fens near Cold Lake, Alberta, and from another system of seismic lines crossing fens that were restored using new upright mounding and hummock transfer techniques near Brazeau, Alberta. These peat cores were used to compare different mounding techniques. Overall, the physical and chemical soil properties and results from the incubation study indicated lower substrate quality on the inverted mounds. The goal of drier microsites for improved tree growth was likely not achieved as volumetric water content (VWC) remained higher than both natural hummocks and hollows. The high VWC could be linked to the high bulk densities observed on the mounds as increased compaction increases water retention. Inverted mounds may also have increased decomposition rates as evidenced from the peat cores indicated aerobic conditions and further changes to peat properties past the exposure of deeper peat. While true total carbon (TC) losses on and off mounds were not quantified from the incubation study, δ13C and C/N ratios may be able to be used as an indicator of TC loss in the field to better understand C cycling on seismic lines. Low-lying areas on seismic lines with inverted mounds had heavier isotopes and lower C/N ratios than the natural areas. Without the exposure of deeper peat, the change in low-lying areas may be from increased decomposition rates. This was not observed on the lines restored by upright mounding or hummock transfer where low-lying areas were comparable to natural areas. Additionally, only minor, and potentially beneficial, changes to soil properties and vegetation functional group cover occurred on upright mounds and transferred hummocks. Findings from this study suggest potential benefits to soil properties and subsequent vegetation recovery of upright mounding and hummock transfer over the classic, inverted mounding.