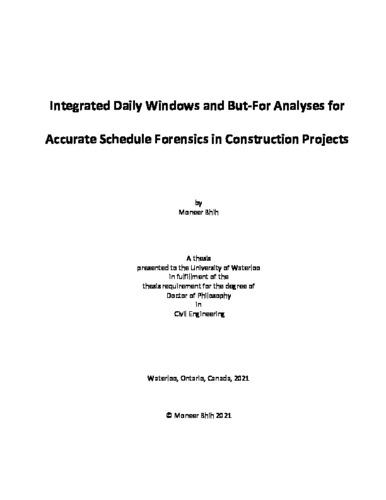 Construction projects usually operate in dynamic multi-party constrained environments that frequently cause schedule delays and cost overruns and lead to disputes among parties. To mitigate such disputes and fairly apportion delay responsibility among parties, forensic schedule analysis becomes necessary. Each schedule analysis technique has its unique methodology, advantages, and drawbacks, thus, no single method provides a comprehensive schedule analysis tool that suits all viewpoints and progress situations, and produces consistent results in all cases. In addition to its drawbacks, some delay analysis techniques have misconceptions associated with its common application, which render it unable to identify concurrent delays and produce different results when used by different project parties. This research, thus, introduces an integrated delay analysis framework that aims at enhancing the current state of forensic analysis to overcome the persistent drawbacks of the techniques. The proposed framework targets the most used and accepted techniques, which are But-For and Windows Analyses, aiming at integrating them to benefit from their advantages and complement each other. As the first step, the framework targeted enhancing the traditional But-For analysis to match the industry standards requirements. The introduced But-For enhancements start with clarifying the misleading interpretations of But-For results and introducing an explicit implementation procedure. As a more accurate approach to consider event chronology and baseline updates, a detailed procedure for applying But-For with multiple analysis windows is introduced. Then, the But-For analysis is extended to the general case of three project parties. Further enhancements to But-For analysis have been introduced by improving the Modified But-For method (MBF). In the literature, the MBF resolved some of the But-For analysis drawbacks, however, its methodology was developed only to allocate schedule delays overlooking the common schedule accelerations. In the second step, the MBF methodology has been extended to allocate both delays and accelerations, then, the Multi-Window MBF analysis has been introduced to address its insensitivity to event chronology and critical path(s) fluctuations, and to consider multiple baseline updates. With those enhancements, the But-For analysis was enabled to allocate both concurrent and non-concurrent delays and accelerations with a clear and structured methodology that considers event chronology and baseline updates. The final step, in this research, introduces an Enhanced Daily Windows Analysis (EDWA) that integrates the ability of the Daily Windows analysis, as the most accurate version of windows analysis, and the ability of the enhanced But-For analysis to analyze concurrent delays and accelerations. The EDWA follows the day-by-day analysis of Daily Windows and apportions delays/accelerations responsibilities using the enhanced But-For methodology. To facilitate the application of EDWA, a macro program was written on MS Project software and case studies were used to prove its ability to resolve the shortcomings of parent techniques. EDWA method contributes to developing a readily usable and comprehensive method for schedule analysis that produces accurate and repeatable results and helps to avoid disputes among project parties.