Comparative Clinical and Cost-Effectiveness Analysis of First- and Second-Line Therapies for the Treatment of Advanced or Metastatic Non-Small-Cell Lung Cancer in Ontario, Canada 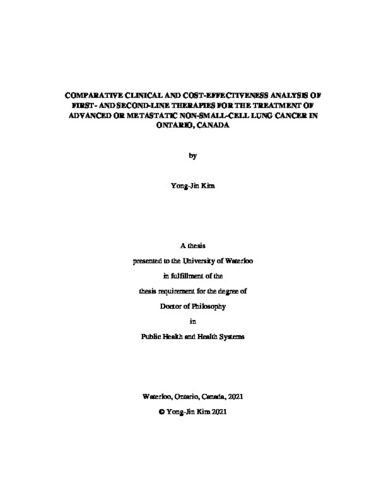 Background: Lung cancer is the most commonly diagnosed cancer and the leading cause of cancer-related deaths in Canada. Over the last decade, significant advancements in treatments for non-small-cell lung cancer (NSCLC) have been made. Development of novel therapies such as tyrosine kinase inhibitors (TKIs) and immunotherapies (i.e., immune checkpoint inhibitors) have offered a new paradigm for the treatment of NSCLC. While several randomized controlled trials demonstrated the efficacy of TKIs and immunotherapies, the comparative effectiveness and cost-effectiveness of these therapies in real-world setting remains unclear. Objectives: The overall aim of this dissertation was to investigate the comparative clinical and cost-effectiveness of first- (i.e., EGFR-TKIs) and second-line therapies (i.e., immunotherapies) for the treatment of NSCLC in Ontario, Canada. Methods: This thesis is presented as three individual studies included in Chapters 3 to 5. Study 1 aimed to investigate the effectiveness of immunotherapies for non-small-cell lung cancer in a real-world clinical setting, as this currently remains uncertain. Systematic searches of PubMed, EMBASE and Web of Science were performed; a narrative synthesis was conducted on all included studies, with the synthesis being stratified by variables including age, sex, histology, prior lines of treatment, brain metastasis, and ECOG-PS. Separate random-effects models were used to estimate pooled median overall survival (OS) and progression-free survival (PFS) estimates. Study 2 aimed to investigate the factors associated with treatment selection and OS for first-line EGFR-TKI therapy among patients with non-small-cell lung cancer. A retrospective cohort study of linked administrative health databases in Ontario, Canada was conducted. To explore the factors associated with treatment selection, we conducted two separate logistic regression analyses comparing afatinib to gefitinib and erlotinib to gefitinib. Discrimination of the models was assessed with the area under the receiver operating characteristic curve. Calibration of the models was evaluated using the Hosmer Lemeshow goodness-of-fit tests. OS was assessed using the Kaplan-Meier method on the overall population and various patient subgroups. The OS was calculated from the date of diagnosis of NSCLC to death (for any reason) or the last day of patient follow-up (censored). Comparisons between groups were performed using the log rank test. Multivariable Cox proportional hazards models were used to determine adjusted hazard ratios and to evaluate the predictive factors for survival. In Study 3, a net benefit regression approach accounting for baseline covariates and propensity scores was used to estimate incremental net benefits and incremental cost-effectiveness ratios. Inverse probability of censoring weights was applied for differential censoring. Outcome measures were calculated over a 68-month period and were discounted with an annual rate of 1.5%. Sensitivity analyses were conducted to assess and characterize the uncertainties. Results: Results from Study 1 provided insights on the effectiveness of immunotherapies, particularly nivolumab, in real-world clinical practice. 36 studies of nivolumab were included for narrative synthesis and 11 of these studies were included for meta-analysis. Age, sex, histology and prior lines of treatment did not affect survival outcomes, while Eastern Cooperative Oncology Group Performance Status and brain metastasis were inversely associated with survival. In the meta-analysis, nivolumab was associated with 9.6 months (95% CI: 8.4–10.9) of overall survival and 2.6 months (95% CI: 1.6–3.6) of progression-free survival. Empirical evidence suggested the real-world effectiveness of nivolumab was consistent with those observed in the clinical trials. Results from Study 2 identified the patient characteristics influencing the treatment selection and overall survival associated with EGFR-TKI therapy. From 01 January 2010 through 31 August 2019, a total of 1,078 patients received an EGFR-TKI as first-line therapy. Of these, 1,011 patients met the eligibility criteria and were included in the study. Treatment selection and OS associated with these treatments were affected by age, sex, geographical residency, comorbidities, and different sites of metastasis. Though recent approval of osimertinib offers a potential new standard of care in the first-line setting, earlier generation TKIs remain pillars in the treatment of NSCLC therapeutic armamentarium. The findings of this study may contribute to optimizing the treatment sequencing of EGFR-TKIs to maximize clinical benefits. Results from Study 3 investigated the comparative cost-effectiveness of EGFR-TKIs in Ontario, Canada. From 01 January 2014 and 31 August 2019, a total of 547 patients met the eligibility criteria and were included in the study. 20.1%, 23.6%, and 56.3% received afatinib, erlotinib, and gefitinib, respectively. Erlotinib was dominated by afatinib and gefitinib. Compared to gefitinib, afatinib was associated with higher effectiveness (adjusted incremental quality-adjusted life-year: 0.21), higher total costs (adjusted incremental costs: $9745), and an incremental cost-effectiveness ratio of $46,506 per quality-adjusted life-year gained. Results from the sensitivity analyses indicated the findings of the base-case analysis were robust. Our findings suggest afatinib was the most cost-effective option among the three EGFR-TKIs. Conclusion: This dissertation investigated real-world clinical and cost-effectiveness of EGFR-TKIs and immunotherapies (nivolumab) for the first- and second-line treatments for NSCLC, and identified patient factors influencing treatment selection and overall survival associated with EGFR-TKI treatment. The findings presented throughout this thesis may contribute to the body of knowledge in regard to optimization of treatment sequences and help policymakers revise healthcare resource allocation decisions.