Synthesis and Characterization of Macrocycles via Migration Insertion Polymerization (MIP) 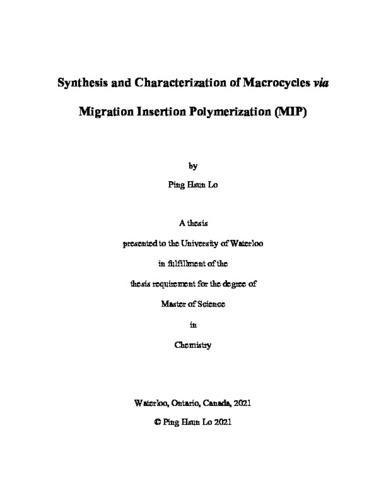 Migration insertion polymerization (MIP) of organometallic monomers, ᴾFpCₓ [ᴾFp = (PPh₂(CH₂)₃Cp)Fe(CO)₂, Cₓ = (CH₂)ₓ₋₁CH₃, X = 12 or 18] were performed ether in bulk or solution. This MIP exclusively produced ring molecules including macrocycles and small rings. The small rings can be completely removed via precipitating the crude products in a poor solvent for the macrocycles. The cold ethanol and cold methanol were used as poor solvents to remove the small ring produced from the MIP of ᴾFpC₁₂ and ᴾFpC₁₈, respectively. The resultant macrocycles were characterized by using NMR, DLS, and TEM. The kinetic study indicated that the early stage of MIP included the oligomerization generating oligomers and the undesired monomer cyclization producing small rings. The resulting oligomers subsequently underwent cyclization, which generates macrocycles. The MIP under certain conditions such as lower temperature or bulk MIP of ᴾFpC₁₈, which favored oligomerization and suppressed monomer cyclization at the early stage, produced a relatively larger yield of P(ᴾFpCₓ)𝗇 macrocycles. Both macrocycles are insoluble in DMF, methanol, and water, but are soluble in THF and toluene. Hexane is a poor solvent for P(ᴾFpC₁₂)𝗇 but is a good solvent for P(ᴾFpC₁₈)𝗇 due to the longer chain of C₁₈. The self-assembly of P(ᴾFpCₓ)𝗇 were briefly studied. Both macrocycles can form stable colloids in DMSO/THF mixed solvents.