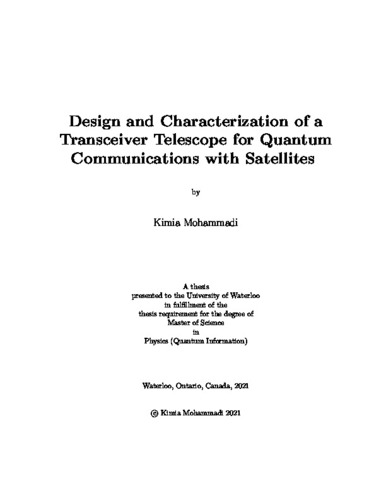 Since the feasibility of free-space Quantum Key Distribution (QKD) was realized, a new race has begun amongst researchers to achieve the highest secure key rate and the most efficient protocols to form quantum communication channels allowing the creation of a global quantum communication network. Since 1992, multiple demonstrations have been executed that resulted in the first quantum network with 4,600 km coverage using optical fibres and Micius quantum satellite in three Chinese cities. In Canada, the Quantum Encryption and Science Satellite (QEYSSat) mission works towards establishing ground-to-satellite quantum links and forming a secure communication network across the country. This thesis investigates the design of a transceiver telescope capable of both transmitting and receiving quantum signals at 785 nm, with higher efficiency than similar commercial options. This telescope is aimed to be one of the quantum ground stations of the QEYSSat project, which establishes a ground-to-satellite link (uplink configuration), to perform QKD with polarization encoded photons. Commercial telescopes and lenses are either not designed or optimized for the specific wavelengths required for a free space quantum link, or are not available in the required size to minimize link loss for beam transmission to a satellite in Low-Earth-orbit (LEO). Thus, a refractive telescope was designed with a custom-designed 8-inch lens and two motorized folding mirrors to emit a quantum signal at 785 nm while tracking the beacon light of the satellite at either 980 nm or 1550 nm wavelengths. Furthermore, the atmospheric turbulence formed by temperature gradients is the main reason for link attenuation in an uplink configuration. Turbulence is highly dependent on the altitude and weather conditions, which makes the prediction challenging. However, it is formulated such that it suggests the maximum length, in which the spatial phase of a travelling light can be saved. By considering the diffraction of the transmitted beam and estimating the turbulence strength we could obtain the lens diameter that has the least link loss in presence of atmospheric turbulence. The manufacturing aspects, like the capability of constructing large lenses and the related costs, were taken into consideration as the important factors in determining the optimal aperture size. The telescope lens was designed specifically for the desired wavelengths, by selecting the optimal material, thickness and radius of curvature. Therefore, the Seidel aberrations that distort the transmitted wavefront were minimized as much as possible. Since the wavefront distorted by the imperfections of the optics or the atmospheric turbulence can be defined by Zernike polynomials, we developed a model to simulate both the lens and the atmosphere structure to predict the far-field beam detected by the satellite. These analyses shed light on the lens specifications and accuracy needed in the manufacturing process, which reduced the costs. Finally, our custom-designed telescope was characterized by applying tests such as polarization measurement to confirm its performance in maintaining the polarization of a transmitted beam at 785 nm. Moreover, the wavefront measurement results and the non-aberrated image of a point light source in a star test validated our optimizations in the lens design. Since the new ground station has passed the preliminary tests for establishing a free-space quantum channel with polarized photons we are looking forward to calibrating the telescope and developing our tracking systems for further QKD experiments, once the QEYSSat microsatellite is launched in near future.

Kimia Mohammadi (2021). Design and Characterization of a Transceiver Telescope for Quantum Communications with Satellites. UWSpace. http://hdl.handle.net/10012/17599