Studying the Structure and Kinetics of Functional Nucleic Acids 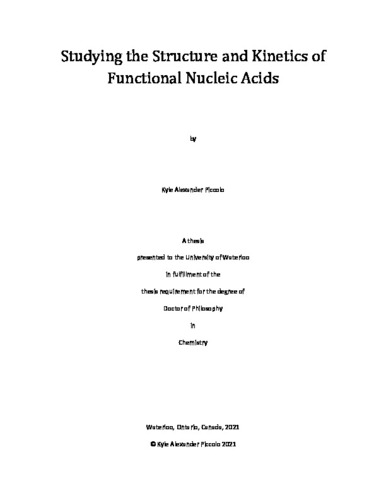 Aptamers are valuable tools in a variety of biotechnological applications, ranging from biosensing to in vivo cell imaging. Studying these molecules can further our understanding of the structure and kinetics of nucleic acid-ligand binding. The sulforhodamine B binding aptamer (SRB-2) is a polyanionic molecule that was selected to bind a ligand with an overall negative charge. It is also a somewhat promiscuous aptamer that can bind ligands that vary markedly in shape, size and charge. These characteristics make its binding mechanisms of interest to characterize. Studying the binding kinetics of SRB-2 resulted in the identification of essential functional groups and led to the conclusion that a ligand that was not the selection target, rhodamine B, actually had the most ideal binding properties of those studied. It had a higher binding affinity than the original ligand, sulforhodamine B. In previous studies with SRB-2, several other ligands showed promise due to their high fluorescence enhancements, but we showed here that they were in fact binding to the aptamer non-specifically, questioning the usefulness of these ligands in potential applications. We used state of the art NMR methodologies to characterize the structure of SRB-2 bound to sulforhodamine B, but came short of elucidating a solution structure. We were, however, able to successfully calculate a structure for one of the stem-loop regions contained in the aptamer sequence. We also studied a DNAzyme containing a Na+ aptamer that clearly discriminates between Na+ and K+ without the use of a G-quadruplex, as would generally be expected. This existence of a selective Na+ aptamer is also encouraging with respect to biosensor development for metal ions. Distinguishing ions as similar in properties to Li+, Na+ and K+ is no small feat and indicates that DNAzymes and/or aptazymes may be a useful method for sensing unique metal ions.