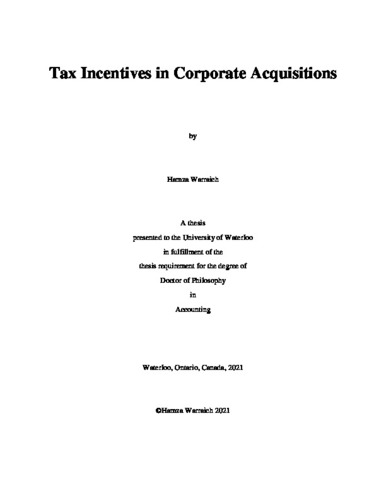 In this dissertation, I examine tax incentives in corporate acquisitions. Reported tax losses or net operating losses (NOLs) under the United States (U.S.) income tax law have grown considerably in recent years. Yet, there is limited empirical evidence on whether target firms’ NOL carry-forward (NOLC), which is a potential tax asset, affects merger and acquisition (M&A) activity. I re-examine two open empirical questions in the literature for which there is limited or no empirical evidence. First, does the acquirer compensate the target’s shareholders for the target’s NOLC? I predict and find that the association between the target’s NOLC and acquisition premium is increasing in the acquirer’s marginal tax rate. Second, does the target’s NOLC affect how the acquisition is financed? Consistent with capital structure theory on the substitutability of debt and non-debt tax shields, I find that the probability of debt financing is relatively lower in deals in which the target has an NOLC. In accordance with the Scholes-Wolfson framework, of “all taxes, all parties, and all costs”, a key insight in this dissertation is that the tax and non-tax attributes of the target and acquirer firm interact to determine the available tax incentive and thus the optimal level of tax-planning. This dissertation also provides new insight into the distortionary effect of tax policy. NOLC-related tax incentives in corporate acquisitions are governed by Section 382 of the Internal Revenue Code. §382 imposes a loss limitation on firms’ tax attributes following an ownership change, effectively reducing the net present value (NPV) of the tax assets. Empirically, I document that the uncertainty inherent in the applicability of §382 rules increases the likelihood that a deal is cancelled. In addition, I find that §382 is an important determinant in the medium of exchange and that the applicability of loss limitation rules is a plausible explanation for the well-documented aggregate trend in the decline in the propensity of all-stock deals. My findings suggest that §382 creates serious and unintended distortions in the merger decision, the effects of which are economically large.