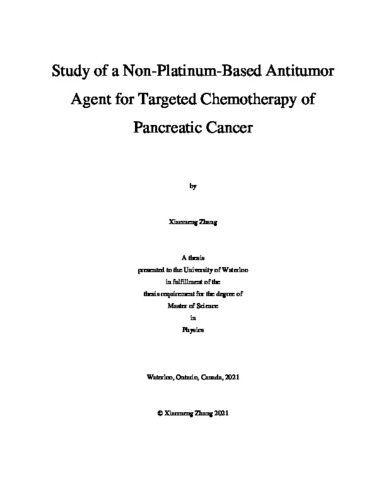 Cancer has been a significant impediment to human life extension. Pancreatic cancer, the third largest cause of cancer mortality, presently lacks a viable therapy and is only detectable at a late stage. The advancement of femtobiology and femtochemistry facilitated the discovery of the exact molecular mechanism of action of the therapeutic anticancer medication. Our group discovered the mechanism of action of cisplatin, being the dissociative electron transfer (DET) reaction with a weakly bound (presolvated) electron. The research in femtobiology and femtochemistry led to the birth of a new frontier called femtomedicine (FMD). With the innovative FMD approach, our group discovered a novel family of non-platinum-based molecules (named FMD compounds) as anticancer targeting agents to replace the effective but highly toxic cisplatin. Overcoming the severe toxicity associated with the heavy metal Pt, these FMD compounds were shown to be effective anticancer agents in natural targeted chemotherapy and radiation therapy for various cancers. At the same time, they induced essentially no harmful side effects. This thesis reports an in vitro evaluation of the therapeutic effect of one of the leading FMD compounds on pancreatic cancer. It presents the results of the anti-tumor efficacy and toxicity in pancreatic cancer cells and normal human cells, respectively, using four well-established cell-based test techniques. These assays include measurements of in vitro cell viability, cell death (reproductive ability), DNA DSB damage, membrane permeability, and apoptosis. The results show that as a potent antitumor agent, the FMD compound effectively reduced the cell viability by over 50 % at the FMD concentration of 300 µM and the reproductive capacity by over 60 % at 50 µM of pancreatic cancer cells. It was also observed by the fluorescent dye that the FMD compound induced severe DNA double-strand breaks and apoptosis to pancreatic cancer cells. Compared with a clinical chemotherapy agent for pancreatic cancer patients, the tested FMD compound exhibited no significant drug resistance in in vitro experiments. Moreover, the treatment of the FMD compound induced negligible toxic effects on normal human cells, which remained 80 % of the cell viability at the FMD concentration of 300 µM and 80% of the reproductive capacity at 50 µM. These results confirm the low toxicity of the FMD compound, which will induce minimum side effects if applied in the clinic. Overall, this study shows good promise of the FMD compound to become a targeted chemotherapeutic agent for pancreatic cancer.