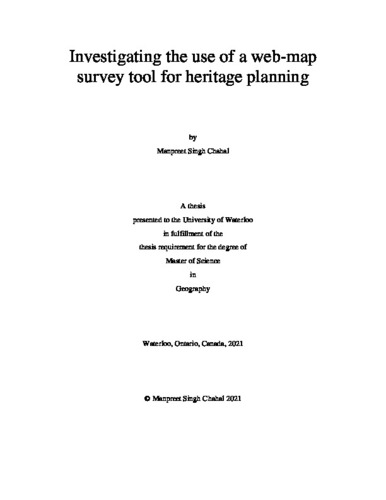 Heritage planning is critical for preserving places of value to community members. Citizen participation is necessary so that the public can have a voice in matters that directly impact their own communities. Public participation has traditionally been in the form of public meetings, workshops, interviews, analog surveys, and questionnaires. However, often only a subset of local residents take part in these physical means of participating in their local community’s decision making. There is a need for the use of web-mapping for gathering citizen input. This study investigated how map-based survey tools can support public participation in built heritage planning in Stratford, Ontario using a web-map tool called Heritage Planner. The main functionality of Heritage Planner was to use its web-map and survey capabilities together to consider heritage value at property- and neighbourhood scales. Due to the Covid-19 pandemic, citizens could not be recruited from Stratford. Instead, students from the Environment Faculty at the University of Waterloo were recruited to provide feedback on the app. Participants who had not visited Stratford before were more inclined to comment on the larger sized properties in the city, while participants who had visited the city before were more inclined to comment on properties influenced by the neighbourhoods they visited. Due to the limitations in this study, the main direction to take for future research would be to implement an improved Heritage Planner app amongst citizens in Stratford and implement similar studies in Ontario and Canada.