Deciphering the Toxicity Effects of 5′-Methylthioadenosine Accumulation in Arabidopsis thaliana 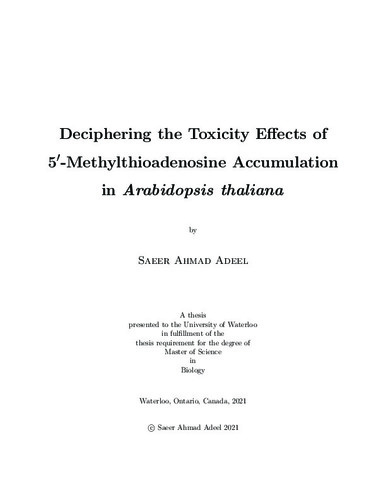 Metabolic constraints imposed by extreme environmental fluctuations are an inescapable reality for sessile organisms such as plants. To survive, they finely tune their metabolic activity to adapt their growth to the surrounding environment. For example, plants couple photosynthesis with the assimilation of sulfate into cysteine, methionine, and S-adenosylmethionine (SAM). They also effectively recycle the sulfur-containing by-product 5′-methylthioadenosine (MTA), which arises from SAM-dependent reactions using MTA nucleosidase (MTN). Arabidopsis thaliana mutants deficient in MTN activity have numerous developmental and metabolic abnormalities due to MTA accumulation. In an attempt to understand the molecular basis of this complex phenotype, a genetic screen was carried out using the single mutant, mtn1-1. This mutant develops a short root phenotype when grown with MTA as the sole sulfur source, and this screen aims to find genetic changes that suppress this phenotype. By identifying and characterizing the dominant genetic suppressor, this study seeks to detail the physiological impacts of MTA accumulation. The mutation, designated as MTA RESISTANT 11 (mtar11), is located in a transcription factor, bZIP29. This transcription factor regulates a plethora of processes in plant development, including genes involved in stress, osmosensory responses, and several core cell cycle genes. bZIP29’s genetic targets are defined by its interaction with other proteins like the TOR complex and other bZIPs resulting in a pleiotropic regulation of plant growth. This suppressor mutant suggests the overall down-regulation of growth caused by MTA accumulation. In addition to overcoming the MTA metabolic pressure, the mtar11 mutation results in the increase of plant growth and fertility in the mtn1-1 background. mtar11 was also commonly found in domesticated plants after a preliminary assessment of its conservation. These two findings led to a more detailed investigation revealing that the mtar11 mutation is more associated with domesticated species. In fact, non-conservative amino acid changes at several other residues within bZIP29 were also associated with domesticated species. A phylogenetic analysis of the 461 homologs of bZIP29 and the 173 plant species these homologs belong to uncovered several instances of independent evolution of these residues and lateral gene transfers. Both these findings reveal a novel evolutionary pressure behind bZIP29. Furthermore, mtn1-1mtn2-1mtar11 plants recover the low TOR activity of the double mutant while significantly increasing it compared to WT. The lack of TOR activity in the double mutant indicates that the majority of growth defects from MTA accumulation arise from the impairment of TOR signaling in plant development. This finding also suggests a novel interaction between bZIP29 and the TOR complex in growth regulation, mostly restricting cell proliferation. The results gathered in this work are assembled into a model that seeks to explain the effects of MTA accumulation on plant physiology. The detailed analysis of mtar11 has revealed further complexity to the tight coordination between plant productivity and sulfur metabolism.