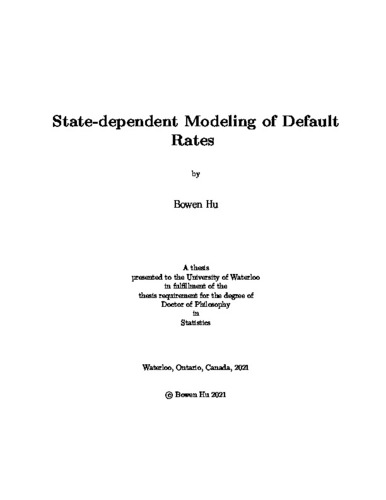 Risk-weight function is the most popular formula for banking regulations used to calculate the amount of backup deposit that banks need to hold in order to bear extraordinary losses. The model behind the formula was introduced by Vasicek in 2002. In that paper, there are several intuitively appealing assumptions which are oversimplified. The most unrealistic assumption made by Vasicek is that correlations among each unit do not depend on the overall market environment. Metzler (2020) has developed a generalized version of the Vasicek model to relax this assumption, which is called the state-dependent model. The model includes a parameter to allow the market correlations to change in a systematic way based on the overall economic level. We apply an EM algorithm that produces consistent estimates of the model parameters proposed by Metzler (2000). We also explore some properties of the model. The model involves an independence assumption, which assumes that the default rate for each time is independent with each other. But according to the plots of the historical data, that assumption is obviously violated. In order to relax the independence assumption, we bring a dependence structure to the model with respect to time by using time series to model the so-called systematic risk factor $M$. By doing so, we bring the forecasting ability to the model and verify its accuracy in the empirical study. The results suggest that the model we proposed shows some advantages compared with the classic auto-regression models. We also demonstrate that the model we proposed can be treated as a general extension of the classic auto-regression models. In the last part, we try to overcome the other well-know problem of the Vasicek model. Both the Vasicek model and SDM model fall into the family of the Gaussian copula. Although the Gaussian copula is widely used in the industry for its nice properties, the 2008 financial crisis warned researchers that tail independence can lead to some fatal results. In order to solve this problem, we change the underlying distribution from normal distribution to t-distribution.