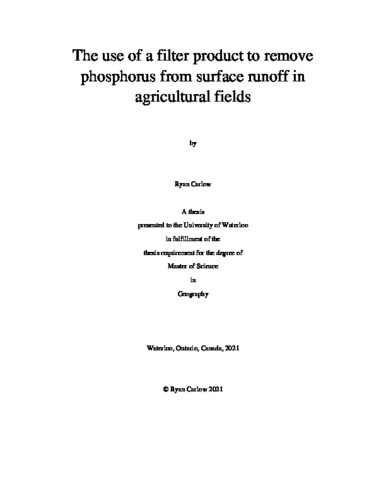 Nutrient losses from agricultural fields are the largest sources of phosphorus (P) entering the Great Lakes in North America. Research has suggested that multiple conservation practices (CPs) used together (stacked) are an effective way to reduce the amount of P losses individual fields; however, some P loss still occurs. Advancements in the chemical removal of P have provided landowners with an opportunity to capture P that has leaves fields in runoff before it enters local waterways and act as a final polishing agent. A commercially available phosphorus sorbing material (PSM) in the form of a geotextile filter was installed on two well managed fields in midwestern Ontario (ILD and LON) to determine its efficacy in removing dissolved reactive P (DRP), total P (TP) and total suspended solids (TSS) from surface runoff, thereby reducing edge of field P losses. Laboratory tests on unused and used filter material were also conducted to try to determine the sorption potential, amount of P stored in the filter and the mechanisms of P removal. During the two-year study period, the filter removed 0.018 kg/ha of DRP, 0.4 kg/ha of TP and 8.75 kg/ha of TSS at the ILD site. In contrast, the filter at LON released 0.22 kg/ha of DRP and 0.15 kg/ha TP, but removed 37 kg/ha of TSS. The filter most effectively removed P within 8 months of filter installation, suggesting that time was a critical factor impacting performance, among others. Laboratory tests on unused (new) and used (field) filter material indicated that the raw filter material had a large potential to adsorb DRP under controlled conditions, and that this potential was smaller in used material from LON but not ILD. The extraction of P from used filter material indicated that the filters retained approximately 200 mg/kg of DRP at each site (0.0027 kg/ha at ILD and 0.0022 kg/ha at LON) with the majority of this P held in more soluble form likely associated with the metal oxides/clay filter components. This suggests that previously retained P has the potential to be rereleased from the filter. Additionally, the amounts of P held in the filter material calculated via lab tests was considerably lower than the amount removed through the water samples calculations suggesting that some of the P removed by the filter did not stay inside the material. The results of this study demonstrate that P has the potential to be chemically removed at the edge-of-field, but the efficacy of filters as a CP differs in both space and time. This thesis has shown how an edge-of-field filter for surface runoff can be implemented in a field setting in midwestern Ontario, and has identified and which factors are most important to determining the efficacy of this practice.

Ryan Carlow (2021). The use of a filter product to remove phosphorus from surface runoff in agricultural fields. UWSpace. http://hdl.handle.net/10012/17569