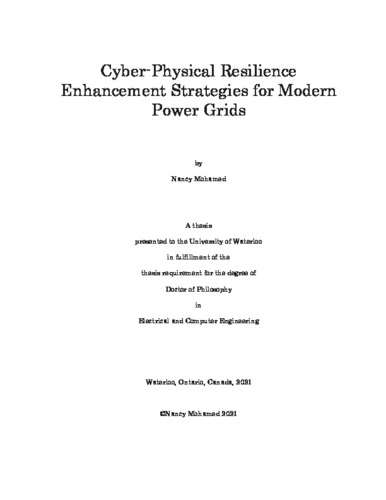 Continuous research efforts are dedicated to developing methods to improve existing security tools to better fit the nature of smart grids. However, there is no perfect security scheme for every potential attack threat. Instead, the new concept of resilience has emerged as a strategic objective in power system planning. Grid resilience is related to the power system’s ability to continue operating and delivering power even in the event of low probability, high-consequence disruptions such as cyber-physical attacks. Grid resilience objectives focus on managing and, ideally, minimizing potential consequences resulting from these disruptions. This thesis focuses on enhancing the cyber resilience of the grid through boosting the system preparedness and recovery potentials through three resilience-enhancing strategies. For boosting the preparedness potential, this thesis focuses on identifying and assessing the system cyber vulnerabilities (threats) so that protective measures can be planned for and proactive plans can be prepared, as recommended by the American National Infrastructure Protection Plans (NIPPS). With this intention, the first strategy is to develop a cyber-based risk assessment framework. The substation vulnerability has been studied under different attack scenarios that are classified based on different attacker models. The outcomes of this analysis are both the risk indices and the asset ranking according to their cyber resilience to help the operator set up informed preventive and corrective plans. The IEEE 30-bus test system has been used to test the algorithms of risk quantification. The second strategy aims to enhance the attack detection capabilities of protective relays to tackle the problem of online settings which are susceptible to modification and fabrication attacks. This thesis develops a tool for detecting compromised settings sent to adaptive protective relays based on physical properties only. Implementing the tool first involves an offline phase in which Monte-Carlo simulation is used to generate a training dataset. Using Rough set classification, a set of IF-Then rules are obtained for each relay and loaded to the relays at the initialization stage. The second phase occurs during online operation, with each updated setting being checked by the corresponding relay’s built-in tool to determine whether the setting is genuine or compromised. A test dataset has been generated to assess the tool performance using the IEEE 34-bus test feeder with DGs included. The third strategy proposed is for the recovery phase. One of the requirements for a resilient distribution system is the ability to supply power to critical loads during disruptive events. It is important when restoring the critical loads to put into consideration the network resilience against post-restoration attacks. This thesis formulates an optimization problem for reconfiguring the network to maximize the restoration of priority loads upon attacks through resilient paths utilizing the cyber-based risk analysis outcome obtained during the pre-disturbance phase. The formulated problem considers both operation and network configuration constraints. The IEEE 37-bus test system has been used to validate the usefulness of the technique. The algorithm has been tested using single and multiple contingencies scenarios, and the results were compared to the algorithms proposed in the literature.