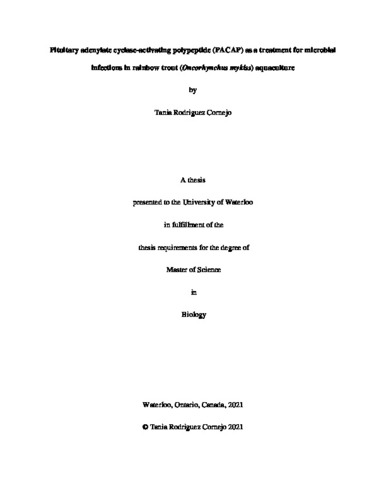 Diseases cause economic losses in aquaculture, and the widespread use of antibiotics in the industry has contributed to the development of antibiotic resistant pathogens, an issue of concern for its repercussions on the production system, the environment and human health. Antimicrobial peptides (AMPs) constitute a promising strategy to develop new drugs for prevention and treatment of diseases, due to their fast and efficient response against pathogens. Pituitary adenylate cyclase-activating polypeptide (PACAP) has shown strong antimicrobial activity and play a role as a regulator of the teleost fish immune system. In the present research, there was a significant increase in the transcription of PACAP splicing variants (PACAP and PRP/PACAP) in spleen, and in the transcription of VPAC2 receptor gene in spleen and head kidney of symptomatic rainbow trout naturally infected by Y. ruckeri compared to asymptomatic fish. Furthermore, the PACAP encoding gene is constitutively expressed in head kidney and skin of rainbow trout. Cytokines of interest in the immune response were also assessed and a significant increase in the transcription of IL-1β, TNFα, IL-6, IL-10 and IFN-γ was observed in spleen, head kidney and skin of Y. ruckeri naturally infected trout compared to clinically healthy trout, highlighting the importance of an active systemic and local immune response. We also studied the synthetic Clarias gariepinus PACAP-38 (PACAP 1) and three modified forms of the peptide (PACAP 2-4) to evaluate their direct antimicrobial function against bacterial pathogens of importance in rainbow trout aquaculture, safety in the host and immunomodulatory properties. The peptides were tested for cytotoxicity in a hemolytic assay using erythrocytes from diploid and triploid rainbow trout, and in a cell viability assay using an epithelial cell line from rainbow trout gills, RTgill-W1. The results showed that only concentrations of 40 and 50 µM of PACAP 4 caused a percentage hemolysis higher than 20%, and that none of the peptides at a concentration of 0.1 µM reduced the cell viability of RTgill-W1. All active variants directly inhibit Flavobacterium psychrophilum and Aeromonas salmonicida growth by over 90% in a broth microdilution peptide assay (BMPA), but only PACAP 2 and 4 inhibited Yersinia ruckeri growth in more than 90% at the highest concentration of 50 µM. In-vitro trials with RTgill-W1 exposed to F. psychrophilum showed that a 24-hour pre-treatment with 0.1 µM of different PACAP variants significantly reduced bacterial growth, however, there was a lack of response of TNFα. Down-regulation in the expression of the IL-1β gene was observed in RTgill-W1 exposed to both PACAP alone and PACAP and F. psychrophilum, which was consistent with the lack of stimulation of the live pathogen alone on non-treated cells as well. These findings could be related to the nature of the cell line, as inflammation could impair the role of gills in respiration, so other mechanisms of the immune response may be involved. Overall, C. gariepinus PACAP-38 and variants have a direct antimicrobial activity and immunomodulatory properties against bacteria of importance in rainbow trout aquaculture, and PACAP 2 is a good candidate for future research due to its improved antimicrobial function and its limited cytotoxicity against host cells. Future in-vivo studies are needed to determine PACAP function at the integral organism level.