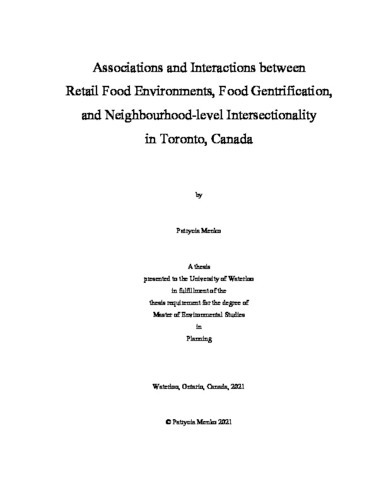 Diet-related disease and food insecurity are growing problems in Canada and globally. Over the last decade, prevalent rates of obesity and type 2 diabetes have increased across the country and Toronto currently has the largest absolute number of food insecure households of any metropolitan city in Canada. Evidence suggests that the retail food environment (RFE) may be an important determinant of population dietary intake, however, much of RFE research has centered on geographic access and food deserts – low-income areas with limited access to nutritious food sources, with few scholars exploring economic dimensions of food access and food mirages – areas where healthy food retailers appear plentiful but remain economically inaccessible for low-income households. Overwhelmingly, RFE research also tends to exclude ethnic grocery stores and other non-traditional food retailers from analyses despite being sources of affordable and cultural food and fostering a sense of place, community, and identity for racialized and low-income residents. Yet, the exact mechanisms which undermine healthy food access remain difficult to capture, especially during this current era of rapid urbanization. Despite a small subset of urban scholars exploring how broader socio-political, -cultural, and -economic implications of gentrification may affect and constrain food access, this particular area of research and phenomenon has not been given enough priority to date in Canadian literature and policy. Moreover, the effects of poverty often interact with race and ethnicity, thus, applying an intersectional framework to quantitative ecological planning research enables more profound analyses of neighbourhood healthy food access. Taken together, these findings point to the urgency of conducting transformative research that isolates urban effects of food access in Toronto and addresses issues of equity and social justice, as well as highlighting the importance of standardizing methodologies so that assessments may be applicable and reproducible across other Canadian cities. To investigate these associations from a planning perspective, I employed an exploratory cross-sectional descriptive and correlational methods to answer several research questions across two manuscripts. First, I created a Social Equity Index (SEI) at the dissemination area (DA) level using 5 variables drawn from 2016 Census data related to food purchasing power. Next, I mapped food deserts and food mirages using the SEI and a categorized set of food retailers, and then observed where these RFEs intersected with gentrifying neighbourhoods (i.e., gentrifying census tracts) and gentrifying policy areas (i.e., Business Improvement Areas). I also derived the predominant racial/ethnic composition of neighbourhoods (i.e., visible minority status) from Census data and organized DAs into social equity groups based on race/ethnicity and SEI score classes. Finally, I used these outcomes to measure differences in the spatial distributions of food retailers (i.e., proximity and density) and identify where food access may be constrained by gentrification processes through further spatial and statistical analyses. My thesis findings reveal that both food deserts and food mirages exist in Toronto, and that Black neighbourhoods are significantly more likely to exist in food deserts. Business Improvement Areas may also be contributing to the presence of food mirages, but more longitudinal research is warranted. I also theorize that food deserts in gentrifying census tracts may be at risk of transforming into food mirages if urban revitalization efforts remain unchecked. After controlling for SEI, racial/ethnic differences for food access are significant for visible minority neighbourhoods to conventional, discount, and ethnic retailers. By illuminating intersectional differences in neighbourhood food access, my research responds to provincial and federal calls from professional planning bodies for Canadian planners to integrate food systems into land use plans and policies and proposes that municipalities engage with “food haven”-type interventions and policies to protect food retailer diversity and mitigate retailer and resident displacement.