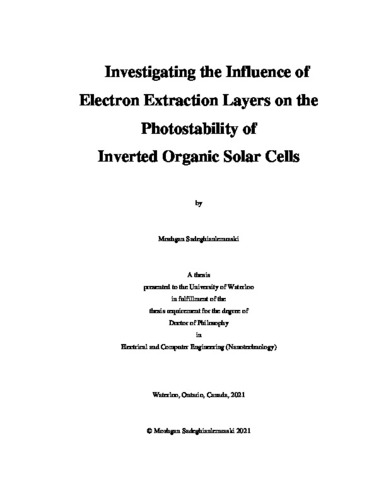 Decades of active research on organic solar cells (OSCs) have recently led to a significant increase in their power conversion efficiency (PCE). However, large-scale commercialization of the technology has not yet been realized, primarily due to the OSCs' short lifetimes. Generally, OSC degradation mechanisms can be categorized as extrinsic or intrinsic. In contrast to extrinsic degradation, which directly results from the cells being exposed to atmospheric species (oxygen and water), intrinsic degradation occurs even when OSCs are kept in an inert atmosphere and can proceed either in the dark or under illumination due to a variety of degrative processes. While extrinsic degradation can be adequately addressed by utilizing advanced encapsulation techniques and inverted device architecture, as well as by the discovery of novel active materials, the latter is still impeding progress. In inverted OSCs, the bottom electrode (i.e., the one contacting the substrate) serves as an electron collection contact and is usually made of a transparent conductive oxide, mostly ITO, to allow for solar light collection. ITO, however, has a work function (WF) of ~ 4.7 eV, which lies close to the middle of the bandgap of most organic active layer materials and thus can allow for undesirable hole collection. Therefore, in most cases, an electron extraction layer (EEL) is used in between the ITO electrode and active layer. The EEL, usually made of a solution-processable wide bandgap metal oxide, blocks the extraction of photogenerated holes from the active layer by the ITO and thus enhances the electron selectivity of the ITO/EEL contact. ZnO has been the most commonly used material for that purpose owing to its low toxicity, high electron mobility, inherent transparency, and its forming a large energy barrier against hole collection (often more than 1 eV). Despite these promising properties, one potential drawback of ZnO is its susceptibility to changes after irradiating by UV components in the solar spectrum. Therefore, alternative EEL materials are sometimes used. Incorporating various materials as EELs has substantially advanced the improvement of OSC performance and lifetimes. However, there is still a need for gaining a clearer fundamental understanding of the effect of EELs on the intrinsic photostability of OSCs and exploring approaches for improving their lifetime. To this end, the research described in this thesis investigates the effects of EELs on intrinsic photostability by (i) studying ZnO, the most widely used EEL (as a reference cell), (ii) modifying ZnO EELs, and (iii) replacing ZnO EELs with alternatives. The investigations on ZnO show that the ITO/ZnO and ZnO/bulk-heterojunction (BHJ) interfaces both influence photostability. Analysis of the surface potential and surface chemistry of contacts indicate that the UV-induced losses of the chemisorbed oxygen on the ITO surface reduce its WF and thus decrease the contact selectivity. In addition, surface defects of ZnO and UV-induced increased charge trapping at these defects reduce the electron selectivity of the ITO/ZnO contact. The reduction in the electron selectivity increases surface recombination at the contact, reducing device photostability. The work on modifying ZnO EELs investigates the effects of adding amine-containing materials in them either mixed with the ZnO or in a separate layer on photostability. Results show that mixing ZnO with the additive significantly reduces UV-induced changes in surface potential and WF and creates a new chemical interface that is electronically more stable. As a result, the electron collection efficiency remains stable under UV irradiation. Using the material in a separate layer enhances photostability by passivating ZnO surface defects, and consequently, preventing the UV-induced increased surface recombination that has been found to play a major role in the low photostability of ZnO cells. The studies on replacing the ZnO EEL with alternatives involve pursuing large dipole moment materials (both polymeric or small molecular) as single layer EELs (DM-EELs). Results show that using DM-EELs suppresses the UV-induced increase in surface recombination observed in the ZnO cells and maintains the hole-blocking properties of the contact upon UV irradiation. The findings provide direct evidence of the importance of maintaining the charge selectivity of contacts to suppress surface recombination and enhance device photostability. A systematic study on degradation phenomena in fullerene-based and non-fullerene-based OSCs reveals that the dominant degradation mechanism is different in each case: photoinduced degradation in the first versus temporal degradation in the second. Regardless of the specific degradation mechanism, the directional dipole moment of the DM-EELs helps maintain charge selectivity irrespective of any UV-induced contact WF shifts. The findings show that using materials with large dipole moments in EELs can provide a universal route for enhancing the stability of inverted OSCs while allowing for green-solvent processability.