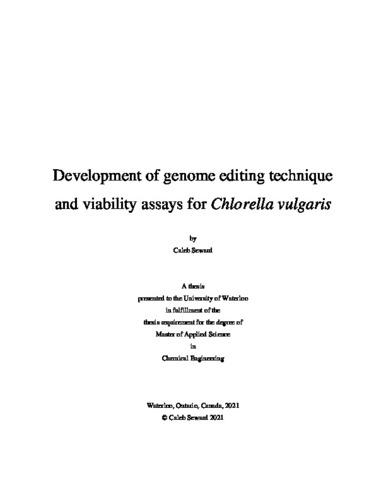 Microalgae have significant potential as sustainable bio-factories for the production of high value compounds such as astaxanthin and for the production of commodity chemicals, like biofuels. However, the use of microalgae, like previous microbial processes, requires significant strain engineering efforts to make these processes economically viable. Currently, the lack of genetic tools for gene editing and strain engineering in the microalgae Chlorella vulgaris; one of the fastest growing species of microalgae, is impeding the commercialization of these processes. Building on well-established strategies used in yeast strain engineering, this work aims to develop an auxotrophic strain of C. vulgaris that can be used as a chassis for future strain modifications as well as establish a functional gene editing protocol for C. vulgaris that can be used to make further deletions and additions to the C. vulgaris genome. Using direct electroporation of CRISPR/Cas9 ribonucleic proteins (RNPs), 4 different sgRNA designs targeting the knock-out of the nitrate reductase gene were tested. Transformants were screened using potassium chlorate (KClO3) as a negative selection agent, however no positive transformants were recovered. To optimize the electro-transformation protocol, impermeable viability probes were used. However, it was apparent that these probes did not behave as expected. To validate the use of several commonly used fluorescent probes in C. vulgaris, their performance in staining live and heat killed cells was observed by fluorescence microscopy, flow cytometry, and fluorimetry. Results indicated that fluorescein diacetate (FITC) and Sytox Green are reliable stains for viability assays in C. vulgaris, while propidium iodide (PI) cannot be used in this species. It is suggested that PI should not be used for viability assays in any species of microalgae as the emission spectra of PI overlaps with the maximum absorbance wavelength of chlorophyll A and B and cellular chlorophyll content can vary considerably in a single species due to changes in lighting, growth medium, and with culture age.