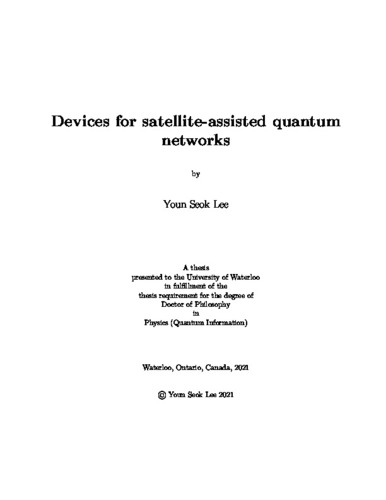 Quantum networks, quantum nodes interconnected by quantum channels, offer powerful means of secure communications and quantum computations. They are crucial elements in a broad area of quantum technologies including quantum simulations and metrologies. In particular, quantum links with satellites take the network into a global or greater scale, extending the capability of transmitting information. It also provides experimental platforms of testing quantum physics in a relativistic regime. The realization of satellite-assisted quantum networks requires devices that are interfaced with quantum optical channels to satellites. This thesis discusses the development of four essential devices, three of which are in line with Canada's Quantum Encryption and Science Satellite (QEYSSat) mission. First, polarization-entangled photon sources are developed to transmit one of the paired photons over ground-based fiber-optic networks and the other over ground-to-satellite free-space links. A practical and versatile interferometric scheme is designed and demonstrated, which allows constructing highly non-degenerate sources with only conventional polarization optics. A method of directly producing entangled photon-pairs from optical fibers without interferometers is studied with thorough numerical analysis to show feasibility of experimental demonstration. An entangled photon source for the QEYSSat mission is conceptually designed, and several key parameters to fulfill a set of performance requirements are theoretically studied and experimentally verified. Secondly, this thesis presents two characterization platforms for optical components that are designed and implemented for the QEYSSat mission. One is to precisely measure transmitted wavefronts of large optics including telescopes. A proof-of-principle experiment is conducted with accurate modelling of measurement apparatus via three-dimensional raytracing, and quantitative agreement between the experiment and simulations validates our methodology. The other provides polarization characterizations for a variety of optical components including lenses, mirrors, and telescopes with consistent precision. A detailed description of subsystems including calibrations and test procedures is provided. Polarization-test results of several components for the QEYSSat are discussed. Third, quantum frequency transducers are developed for single-photon quantum key distributions with QEYSSat links. The devices are designed to translate the wavelength of single-photons emitted from quantum dot single-photon sources to QEYSSat channel wavelength via four-wave mixing Bragg-scattering process. Two optical media are concerned: a silicon nitride ring resonator and a photonic crystal fiber. Thorough numerical simulations are performed to estimate the device performance for both cases. A proof-of-principle demonstration of the frequency translation is conducted with a commercial photonic crystal fiber. Finally, a quantum simulator, serving as a quantum node in satellite-assisted quantum networks, is designed in a silicon nitride nanophotonic platform with cesium atoms. The designed photonic structure tailors electromagnetic vacuum such that photon-mediated forces between atoms causes collective motions mediating site-selective SU(2) spin-spin interactions. A coherent spin-exchange rate between atoms and collective dissipation rate of atoms are precisely estimated via finite-element time domain simulations. Furthermore, two schemes of trapping atoms in the vicinity of the designed structure are studied with calculations of potential energies and phonon tunneling rates. Experimental progress toward realization of the proposed system is summarized. The presented research activities of designing, analyzing, and implementing devices demonstrates the readiness of satellite-assisted quantum networks. This work contributes to creating quantum channels by entanglements with interfaces of various quantum systems in line with a broader scope of establishing a global quantum internet and quantum space exploration.