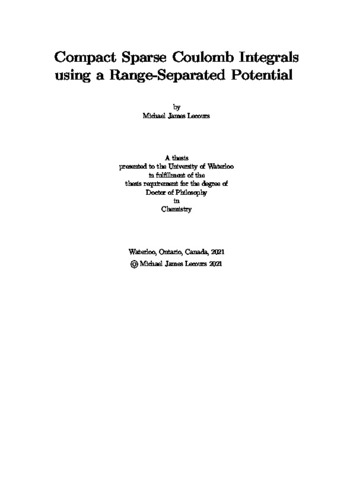 The efficient calculation of so-called two-electron integrals is an important component for electronic structure calculations on large molecules and periodic systems at both mean field and post-HF, correlated, levels. In this thesis, a new and fairly complicated representation of the Coulomb interaction is presented. The Coulomb potential is partitioned into short and long-range parts. The short-range interactions are treated analytically using conventional density fitting methods. The long-range interactions are treated numerically through either a Fourier transform in spherical coordinates or through a Cartesian multipole expansion. The Fourier transform is used for intermediate distances, while multipole expansions (up to octupole) are used for longer range, with a switching algorithm to decide between the two. In this range-separated representation, the corresponding two-electron Coulomb integrals can be calculated efficiently and the amount of data scales linearly with respect to system size. Hartree-Fock theory is used as an extensive test of the range-separated method, but the same building blocks can be used in correlated calculations like Second-order Moller-Plesset perturbation theory and (Cluster in Molecule) type Coupled Cluster calculations.