Escaping the woes through flow 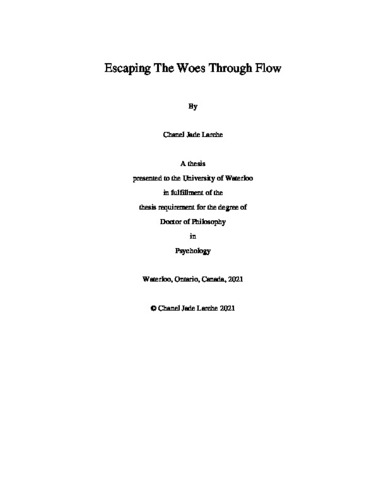 Recently there has been concern surrounding the relation between flow (a state of deep and effortless concentration) and the development of problematic gaming among players who game to escape noxious mood states (Hull et al., 2013). There is a scarcity of research examining how this relation might extend to smartphone games, and whether this relation is consistent across all game types. The current research first experimentally manipulated an antecedent of flow (the skill-challenge balance) and measured flow within a smartphone game of complex difficulty, followed by determining whether such flow experiences varied as a function of playing to escape. Findings in Chapter 2 showed that games around players level standings were perceived by players as having a more equivalent balance of challenge and skill compared to much harder or much easier games. Yet, both optimally challenging games, and games that were too hard, each induced comparable amounts of flow, positive affect, and urge-to-play with levels exceeding that of the very easy games. The experience of the players supported a “quadrant” model of flow in which the greatest flow was experienced by the most skilled players. Chapter 3, showed that those who played to escape experienced more boredom in everyday life, as well as more problems related to gameplay. Moreover, these bored escape players were more prone to the rewarding aspects of flow – they showed higher positive affect during gameplay compared to those who do not play for escape. In Chapter 4, we demonstrated that these findings translated in part to a popular role-playing game, but not a platform arcade game. Finally, in Chapter 5 we discuss how these findings broaden our understanding of how escape players may be more likely to develop problems through the hedonic appeal of flow. We further discuss how future research can examine flow and its relationship to the development and maintenance of problematic gameplay.